The fate of Aleksei Navalny remains unclear, however. He could be held in a high-security prison in Moscow for other pending legal matters. …

MOSCOW — A Russian court cleared the way on Saturday for the possible transfer of the opposition leader Aleksei A. Navalny to the country’s penal colony system, the latest step by the authorities to silence the man who has become the country’s most vocal critic of President Vladimir V. Putin.

The court rejected Mr. Navalny’s last possible appeal before such a transfer, but it remains unclear whether or when he will leave his cell in a high-security prison in Moscow. He could be held there for further court appearances on other pending legal matters.

Mr. Navalny was detained in January upon returning from Germany, where he was being treated for a near-lethal poisoning with a nerve agent last year — an act that he and Western governments blamed on the Kremlin. He returned despite knowing that his homecoming would almost surely land him in prison, a challenge that gave rise to mass street protests in support of him.

The ruling, which was expected, upheld Mr. Navalny’s sentence of more than two years in prison and set Russia on a collision course with Western nations, which could impose additional sanctions on Moscow. On Tuesday, the European Court of Human Rights, whose jurisdiction is recognized by Russia, ruled that Mr. Navalny must be released immediately from prison.

The Kremlin’s spokesman, Dmitri S. Peskov, rejected that demand and called the Strasbourg-based court’s ruling “a serious attempt to intervene in internal judicial matters of Russia.”

In his final argument in court on Saturday, Mr. Navalny quoted from the Bible, and said that prosecutors, the 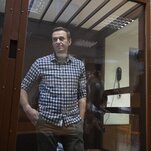