Russian Journalist Sets Herself on Fire and Dies, Blaming Government

The self-immolation by the journalist, Irina Slavina, 47, a longtime Kremlin critic, came a day after the authorities in her hometown of Nizhny Novgorod had searched her apartment. …

MOSCOW — A Russian journalist who edited an independent news website died on Friday, setting herself afire in front of police headquarters in the city of Nizhny Novgorod, a day after investigators had searched her home there.

Just before her self-immolation, Irina Slavina, 47, the founder and editor of Koza Press, a local news site, posted a message on Facebook saying: “I ask you to blame the Russian Federation for my death.”

Koza Press confirmed her death. The local branch of the Investigative Committee, Russia’s equivalent of the F.B.I., said in a statement that the allegation that her death had anything to do with the search of her apartment was “groundless.” The statement said the search had been conducted as part of a criminal case in which Ms. Slavina was considered a witness.

Ms. Slavina said on Facebook Thursday that early in the morning 12 people, including members of a special police unit, had conducted a search of her apartment. The Facebook post said law enforcement agents had been looking for “brochures, leaflets, accounts” from Open Russia, an opposition organization, financed by Mikhail B. Khodorkovsky, a Kremlin critic, who had to flee Russia after spending more than a decade in prison.

The search was conducted as part of a criminal case against Mikhail Ioselevich, a local entrepreneur, who the authorities suspect was working together with Open Russia, officially regarded as an “undesirable organization” in 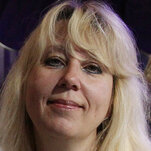