Russians Were Urged to Return to Normal Life. Except for Putin.

The Russian leader claims to be conquering the pandemic, but he inhabits a virus-free bubble, rarely leaving home. The few people he meets must quarantine first. …

MOSCOW — The officials from a secretive Russian security force seemed to know exactly what they wanted when they reached out to Olga Izranova’s company last spring.

They wanted movable tunnels that douse people in clouds of disinfectant.

“They said it had to be done very fast,” Ms. Izranova recalls.

She admits the tunnels are of limited efficacy in the coronavirus pandemic, but for her most important customer, every bit counts. The Federal Protective Service, Russia’s answer to the Secret Service, has helped build a virus-free bubble around President Vladimir V. Putin that far outstrips the protective measures taken by many of his foreign counterparts.

Russian journalists who cover Mr. Putin have not seen him up close since March. The few people who meet him face-to-face generally spend as much as two weeks in quarantine first. The president still conducts his meetings with senior officials — including with his cabinet and his Security Council — by video link from a spartan room in his residence outside Moscow, which has been outfitted with Ms. Izranova’s disinfectant tunnel.

In the coronavirus pandemic, Mr. Putin’s Russia has often been compared to the United States and Brazil, two other large countries whose leaders have played down the disease’s risk and saw it spiral out of control. But while President Trump and President Jair Bolsonaro of Brazil have chafed against restricting their own movements, Mr. Putin has retreated into an intricate cocoon of social distancing — even as he has allowed life in Russia to essentially return to normal.

The contrast between the behavior of Mr. Putin and that of his people now looms large, as a second wave of the pandemic threatens to wash over Russia. In 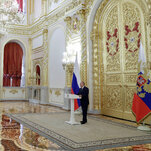