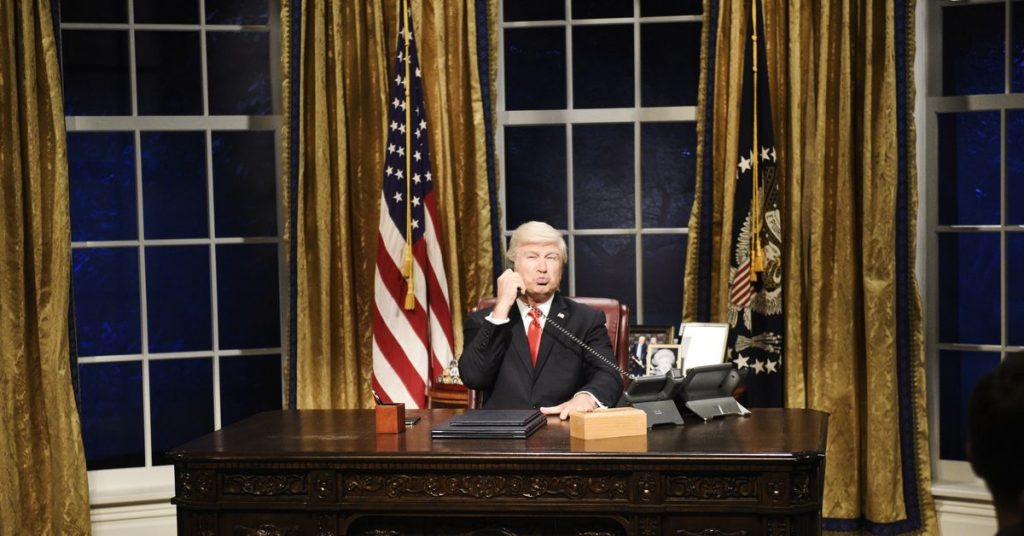 Saturday Night Live returned for its 45th season by once again poking fun at the 45th president of the United States. This time, Alec Baldwin’s President Donald Trump was desperately phoning friends, foreign leaders, and celebrity allies to solicit their help in fighting a newly opened impeachment inquiry.

A week of political turmoil led to House Speaker Nancy Pelosi announcing her support for an impeachment inquiry, following a whistleblower complaint that alleged Trump pressured Ukraine to investigate a potential political rival, former Vice President Joe Biden. SNL seized the opportunity provided by the situation, with Baldwin returning to headline, despite having said he planned to retire his Trump parody.

The cold open begins with Baldwin using one of Trump’s catchphrases — presidential harassment — to complain about the impeachment process.

“It’s the greatest presidential harassment of all time,” he says. “I should know. I’m like the president of harassment.”

The show was not subtle in mocking key administration figures, and made fun of Trump’s personal lawyer Rudy Giuliani — portrayed by Kate McKinnon — for sharing sensitive, personal information on live television (Thursday, Giuliani read text messages from a Kurt Volker, the State Department’s former special envoy for Ukraine on Fox News). When McKinnon’s Giuliani receives a concerned call from Baldwin’s Trump, the character assures him that none of their wrongdoings will become public — while he is filming an appearance on CNN.

Baldwin then calls a string of his other administration members and family: Aidy Bryant’s Attorney General William Barr; Beck Bennett’s Vice President Mike Pence; and Alex Moffat and Mikey Day’s Donald Trump Jr. and Eric Trump. Baldwin’s Trump, however, has little success in finding a solution to his impeachment, with Barr summing up the response to the president’s entreaties: “Where are you going to find a sacrificial patsy that’ll do anything you say? Not it.”

As Trump begins to panic, Kim Jong-Un swoops in to give some advice on how to handle whistleblowers. Played by the show’s first East Asian cast member Bowen Yang, Kim tells Trump the solution is simple: “You have a big ocean in your country? Send whistleblower to the bottom of there.”

Baldwin attempts a few more unsuccessful phone calls — with Kanye West, played by Chris Redd, and Don King, played by Kenan Thompson, telling the president they’re withdrawing their support, before he hears from Cecily Strong’s Jeanine Pirro, who cheers him up by referring to him as her “special, beautiful boy” and by telling him how handsome he is.

At last out of options, the skit sees Trump deciding to call an expert. He reaches out to actor Liev Schreiber, who, playing himself, explains that the fixer he portrays on Ray Donovan is a fictional character.

To that, Baldwin simply responds: “If you can’t do it, can you connect me with John Wick?”