South Africa Court Set to Rule on Jacob Zuma, and an Era of Impunity

“He is now running out of legal runway,” one law expert says, as the country’s highest court will decide whether the former president can be jailed for contempt. …

JOHANNESBURG, South Africa — For nearly three years, South African investigators have been unearthing a web of corruption around former President Jacob Zuma in a public inquiry that has captivated the country.

There were bribes paid in top-shelf whiskey, luxury cars and a cash-stuffed Louis Vuitton bag. High-ranking officials distributed lucrative government contracts in exchange for monthly handouts. That era of graft drained tens of billions of dollars from state coffers and has become one of the most infamous chapters of South Africa’s post-apartheid history.

Now, the country’s highest court will determine whether Mr. Zuma can be held accountable for contempt of court, and for an era of consequence-free corruption, in a hearing that represents one of the greatest tests for South Africa’s democratic institutions in recent years.

“This is an absolutely critical moment: The principle that all people will be equal before the law is being challenged and the constitutional system itself is being challenged,” said William Gumede, the chairman of the Democracy Works Foundation, a South African nonprofit group. “Essentially, the former president is saying he is above the law of the country, he is above the Constitution, he is untouchable.”

Mr. Zuma defied a court order to appear before corruption investigators, a move that challenged the legitimacy of South Africa’s legal system and prompted the chief investigator to seek a two-year prison sentence for Mr. Zuma for contempt of court.

The Constitutional Court is unlikely to impose such a harsh sentence when the verdict is announced in the coming weeks. Doing 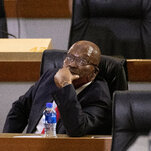