Speaking of Britney … What About All Those Other Women?

Monica Lewinsky. Janet Jackson. Lindsay Lohan. Whitney Houston. We are living in an era of reappraisals. …

Such reappraisals have become common over the past several years. In the midst of #MeToo and a reckoning over racial injustice, people have begun to re-examine the art, music, monuments and characters on whom cultural significance has been placed.

But this current wave revolves not around individuals so much as the machine that produced them: the journalists, the photographers, and the fans — who were reading, watching, buying.

“To me, the question is, what do we do when a whole culture essentially becomes the subjugator?” Monica Lewinsky said in a recent interview. “How do we unpack that, how do we move on?”

‘It Was a Different Time’

In his book, “The Naughty Nineties,” David Friend, an editor at Vanity Fair, described how the market for humiliation thrived in the early ’90s, a trend that can be traced, in part, to the rise of tabloid talk shows such as “The Jerry Springer Show.”

Gossip magazines ruled during this time, which meant that the paparazzi did, too. They photographed under skirts, chased cars down winding roads, competing, often dozens at a time, for images that could fetch millions.

But the race for the most salacious shot was never an equal-opportunity game. It was not young men who appeared in photos with their bra straps showing and their makeup smeared, or had their breasts enlarged in postproduction without their knowledge, as was the case for Ms. Spears on a 2000 cover of British GQ, according to the photographer, who recently posted about it on Instagram. While white women were scrutinized 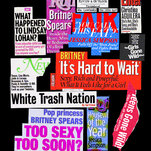