Teachers are leading a national workers’ revolt. Oakland may be next. 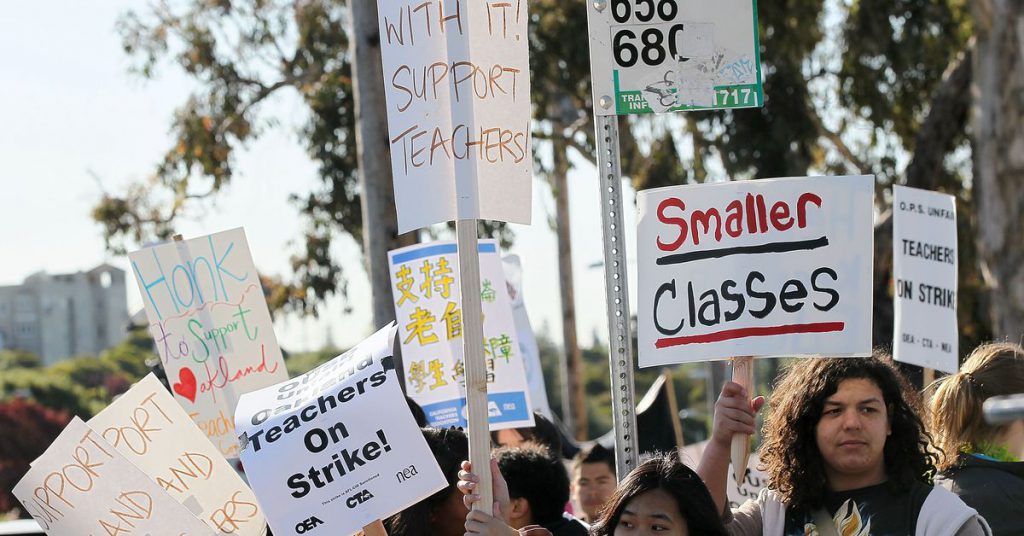 Public school teachers in Oakland, California, said they will strike on Thursday, following 18 months of tense negotiations with district officials over pay raises and classroom sizes.

“We have had it. Enough is enough, bargaining with our school district has not worked,” said Keith Brown, a middle school teacher and president of the Oakland Education Association, during a press conference on Saturday. “Our schools have been starved of resources for years.”

If they don’t reach a deal before Thursday, about 3,000 teachers won’t show up to work in one of the state’s largest school districts, which has struggled from years of budget cuts and poor student performance.

Teachers say the lack of investment in city schools is hurting student performance. The cost of living in Oakland has also skyrocketed in recent years, due to an influx of high-skilled workers unable to afford housing across the bay in San Francisco, making it impossible for teachers to live there on their current salaries, Keith said. Teachers want a pay raise, smaller class sizes, and more counselors and nurses.

The strike in Oakland would come a month after teachers in Los Angeles walked off the job with similar demands — and ended up getting a lot of what they wanted. At the time, LA officials said the same thing Oakland officials are now saying: We just don’t have the money.

Oakland schools are facing a $56 million budget deficit in the next two years, so the school board wants to cut school spending, not increase it. School officials are trying to get more money from the state, but teachers are ready to walk out. And they know they have leverage.

It’s just the latest strike in what’s becoming a national trend. More than 100,000 public school teachers in six states have walked out of class in the past year, rebelling from years of stagnant wages, crumbling infrastructure, and deep budget cuts to education. The strikes in Arizona, West Virginia, Kentucky, Oklahoma, California, and Colorado had broad public support, forcing state lawmakers to raise pay and fueling a national movement to boost investment in public education.

So far, that momentum shows no signs of slowing down.

Funding for public schools in California is a mess

Oakland teachers share a lot of the same frustrations that led LA teachers to walk out of class in January. They say school districts are spending too much money on privately run charter schools that have little public oversight. They also believe they are paid too little working in a state with much wealth.

California is among states spending the least on each student (adjusted for the cost of living), largely because of the state’s strict limits on property tax rates.

The Oakland Education Association, a labor union representing 3,000 educators, has been trying to negotiate a new contract since the last one expired in 2017. Teachers want a 12 percent pay raise over three years, smaller classes, and more support staff. One school counselor for every 600 students is not conducive to a student’s success, says Keith Brown, the group’s president.

The district has offered a 5 percent raise over three years.

“Unless there are dramatic changes to the district’s approach, including spending more money on students and for nurses and counselors, lower class size, and a living wage that will keep Oakland teachers in the classrooms, we will strike,” Brown said.

The school district has said it is willing to keep negotiating for a better deal to avert the strike, and would consider some recommendations from an independent panel, which found that low teacher pay, large class sizes, and school privatization were hurting Oakland schools. The report also acknowledges the state’s “complicated, flawed” system for funding public education.

“Despite our challenges, we are prepared with a comprehensive proposal to reach an agreement. If both sides are committed to settling the contract before a strike occurs —and we are — an agreement can certainly be reached without disrupting the educational experience for students, families and staff,” Oakland Schools Superintendent Kyla Johnson-Trammell said in a statement Saturday.

They have three days to try and reach a deal.

A record number of US workers went on strike or stopped working in 2018 because of labor disputes with employers, according to new data released last week by the US Bureau of Labor Statistics. A total of 485,000 employees were involved in major work stoppages last year — the highest number since 1986, when flight attendants, garbage collectors, and steelworkers walked off the job.

Frustrated public school teachers were behind the year’s largest walkouts, but hotel housekeepers and steelworkers also organized strikes that lasted for days.

There are no signs that worker angst has subsided. So far, in 2019, teachers in two major cities have launched their own strikes. And in January, the Los Angeles teachers strike shut down the nation’s second-largest school district for more than a week.

As part of their deal with city officials, teachers agreed to a 6 percent raise and slightly fewer students in each classroom, according to Alex Caputo-Pearl, president of United Teachers Los Angeles, a labor union that represents about 34,000 public school teachers, nurses, librarians, and support staff in the city.

Last week, more than 2,000 teachers in Denver went on strike for three days. The school district ended up giving educators and extra $23 million in pay and agreed to overhaul the compensation system, which relied heavily on annual bonuses.

Now Oakland teachers are prepared to walk out, and Sacramento teachers may follow.