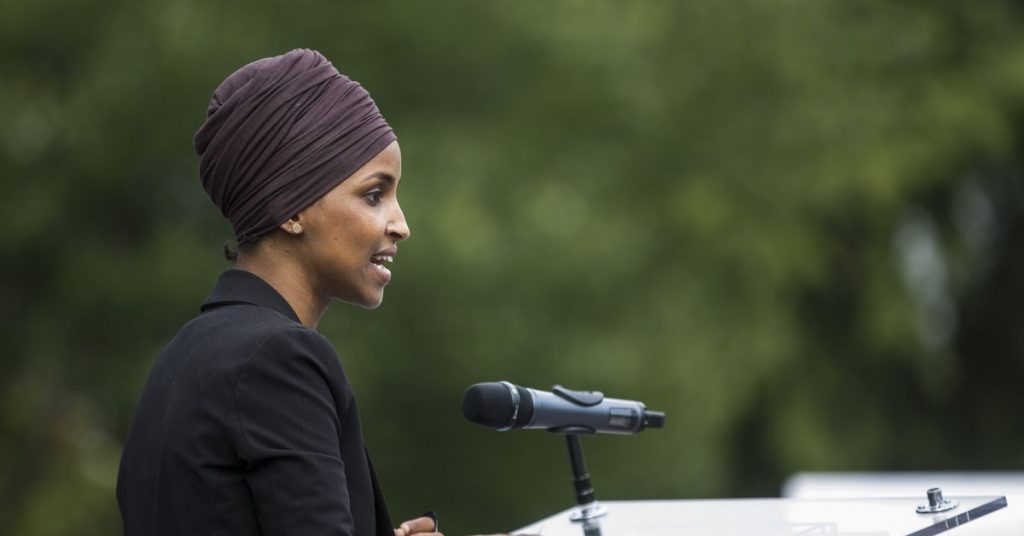 Want to know how awful racism can still be in America? Look no further than the vitriol directed at Ilhan Omar.

Take, for example, the events of just the past several days. Last week, Twitter finally suspended the account of one of Omar’s Republican challengers, Danielle Stella, after she called for the congresswoman to be tried for treason and hanged if an unproven conspiracy theory that Omar gave sensitive information to Iran were confirmed. And Tuesday, the Tampa Bay Times reported that the campaign of Republican George Buck, a challenger to Democratic Rep. Charlie Crist in Florida, sent out a fundraising letter accusing Omar of secretly working for Qatar and reading, “We should hang these traitors where they stand.”

Racist threats and attacks are nothing new, but against Omar, they’re on overdrive.

It’s a depressing reversal from the triumph of the Minnesota Democrat’s 2018 watershed victory: Omar is a Somali refugee, and she and Michigan Rep. Rashida Tlaib were the first two Muslim women to be elected to the United States Congress. “I stand here before you tonight as your congresswoman-elect with many firsts behind my name,” Omar said the night of her election. “The first woman of color to represent our state in Congress. The first woman to wear a hijab. The first refugee ever elected to Congress. And one of the first Muslim women elected to Congress.”

While many progressives and proponents of diversity celebrated Omar’s victory, it has also brought to the surface a dark underbelly of American culture. A Muslim, a black woman, and a refugee, she faces Islamophobia, racism, misogyny, and anti-immigration strains in American culture, and putting that confluence of hate under the microscope is truly disturbing.

Ilhan Omar has faced racist attacks from the get-go

Omar has been in office for less than a year, and there are countless examples of vitriol and attacks against her — from the public, from her opponents, and even from the White House.

It is true that she has at times raised eyebrows with her own remarks and tweets, namely that critics say they sometimes have anti-Semitic airs (for which she has apologized). But as Vox’s Nisha Chittal has argued, Omar (and her fellow first-term members of color in Congress) have been subjected to a more intense backlash for their comments, controversial or not. And that backlash is predominantly about “silencing outspoken women of color.”

In April, a New York man was arrested for threatening to assault and murder Omar. He called Omar’s office and allegedly told a staffer, “Do you work for the Muslim Brotherhood? Why are you working for her, she’s a … terrorist. I’ll put a bullet in her skull.” In November, the man pleaded guilty to threatening to kill Omar, after which she in a letter called for “compassion” in his sentencing. “Threatening assassination of a public official is dangerous to both the individual and our republic,” she wrote. She also noted that “threats of political violence and hate speech are not unique” to the man.

Including and perhaps especially toward her.

Over the summer, Omar received a threat that someone would shoot her at the Minnesota State Fair. Alabama Republicans called for her to be expelled from Congress, accusing her of engaging in “rhetoric that explicitly runs counter to American values and patriotism” and citing remarks she’s made about terrorism and Israel. Omar is often the subject of conspiracy theories and racist memes that spread on social media.

President Donald Trump has repeatedly targeted Omar. He has seized on Omar’s comments about Israel and the pro-Israel lobby (Vox’s Zack Beauchamp has a good rundown) by publicly disparaging her on multiple occasions. During a July rally, Trump claimed that Omar blames the US for terrorist attacks and suggested she supports al-Qaeda (which she does not), after which attendees chanted “send her back.” Days before, the president had fired off a series of tweets saying that Omar and three other Democratic women of color in Congress — Tlaib, Alexandria Ocasio-Cortez, and Ayanna Pressley — should “go back and help fix the totally broken and crime-invested places from which they came.” The president has also promoted the lie that Omar “partied” on 9/11 after some of the representative’s comments about the attacks were taken out of context and used by Republicans to criticize her and repeated the conspiracy theory that she’s married to her brother.

The threats and attacks have resulted in increased security for Omar. Her supporters have rallied behind her: In July, she was greeted by constituents chanting “welcome home” when she arrived at the Minneapolis airport.

MN Congresswoman Ilhan Omar received a rousing welcome home from Washington after several days of feuding with President Trump. She made it clear she will not back down. #omar pic.twitter.com/L7krbsHsKv

Of course, Omar is hardly the only politician to face racist attacks. Former President Barack Obama was for years dogged by “birther” rumors, which were propelled by the current president, and many people throughout the country face racism and hate daily.

A majority of Americans say that race relations in the United States are poor and that they have become worse with Trump in office, and black Americans tend to see the situation as worse. They also say it has become more common for people to express racist or racially insensitive beliefs. American Muslims are the religious minority group likeliest to report experiencing religious discrimination in the US, and Republicans have become increasingly hawkish on immigration. It paints a disheartening picture of the state of racial, religious, and ethnic minorities in the US — and one the attacks on Omar personify.

“From the start of our democracy, politicians have proudly held starkly different views. But have attacks ever been as vicious as they are against Omar?” writer Tashmiha Khan asked in the Independent this summer.

Branko Marcetic in Jacobin suggested that beyond racism, the assault on Omar also ties to her progressive views:

As Omar herself said, by trying to paint her as a Bush-era, Islamophobic caricature come to life, Trump is, on one level, trying to use racist fearmongering to distract from his own willful failure to improve the lives of working Americans, a strategy that’s already failed spectacularly during the 2018 midterms. On another level, he’s trying to undermine the working-class solidarity Americans of all backgrounds ought by rights to feel.

There is a lot of thinking to do about the why of the contempt for Omar among some circles, but it’s really stark just to look at the what.