The Downside to Life in a Supertall Tower: Leaks, Creaks, Breaks

432 Park, one of the wealthiest addresses in the world, faces some significant design problems, and other luxury high-rises may share its fate. …

CIM Group, one of the developers, said in a statement that the building “is a successfully designed, constructed and virtually sold-out project,” and that they are “working collaboratively” with the condo board, which was run by the developers until January when residents were elected and took control. (Developers typically control condo boards in the first few years of operation.) “Like all new construction, there were maintenance and close-out items during that period,” they said. Macklowe Properties, the other developer, declined to comment.

The construction manager, Lendlease, said in a statement that they “have been in contact” with the developers, “regarding some comments from tenants, which we are currently evaluating.”

Ms. Abramovich and her husband, Mikhail, retired business owners who worked in the oil and gas business, bought a high-floor, 3,500-square-foot apartment at the tower for nearly $17 million in 2016, to have a secondary home near their adult children.

She was disappointed with her purchase on day one, she said, when she left her home in London in early 2016 to move into what she expected to be a completed apartment, and found that both her unit and the building were still under construction.

“They put me in a freight elevator surrounded by steel plates and plywood, with a hard-hat operator,” she said. “That’s how I went up to my hoity-toity apartment before closing.”

Problems escalated from there, she said. There have been a number of floods in the building, including two leaks in November 2018 that the general manager of the building, Len Czarnecki, acknowledged in emails to residents. The first leak, on Nov. 22, was caused by a “blown” flange, a ribbed collar that connects piping, around a high-pressure water feed on the 60th floor. Four days later, a 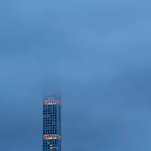