The Drawbacks of Living in a Tiny Home During a Pandemic

Lockdowns are harder when you’re stuck in a small space and can’t stockpile food or toilet paper. …

Keri Gailloux’s tiny home — a converted school bus — is also retired now, thanks to the pandemic. Ms. Gailloux, 68, had lived and worked in San Francisco running a hepatitis C training program for primary care doctors, but after retirement she converted the school bus which she named “Skoolie,” into a mobile home so she could travel. Six months before the pandemic, she hit the road.

“It was supposed to be my forever home,” Ms. Gailloux said. But it was not to be.

She had planned on staying at the Mustang Island State Park on the gulf in Corpus Christi, Texas until the coronavirus curve flattened, but the morning after her arrival, a ranger told her the park was closing. Ms. Gailloux needed a park that had full hookups, as she didn’t own a portable generator, has limited funds and could not find a store selling one for less than $1,000.

“I walked with my dog to the gulf, stood in the water and cried,” Ms. Gailloux said. “It was truly one of my lowest moments.”

She convinced the ranger to let her stay for a few more days, but shortly after, Texas Gov. Greg Abbott closed all the campgrounds and public lands in Texas. Then, Ms. Gailloux’s tiny home broke down and had to be towed.

Today? Her beloved bus is in storage, emptied of all personal belongings and is for sale. Once it’s sold, Ms. Gailloux plans to pay off the debts she accumulated while she was on the road. She is currently living with and caring for a friend’s mother in Long Beach, Calif. In a big home.

“I hope to get back out on the road in the future in some other form, but for 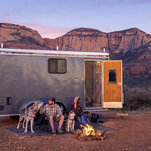