The faulty technology behind ankle monitors 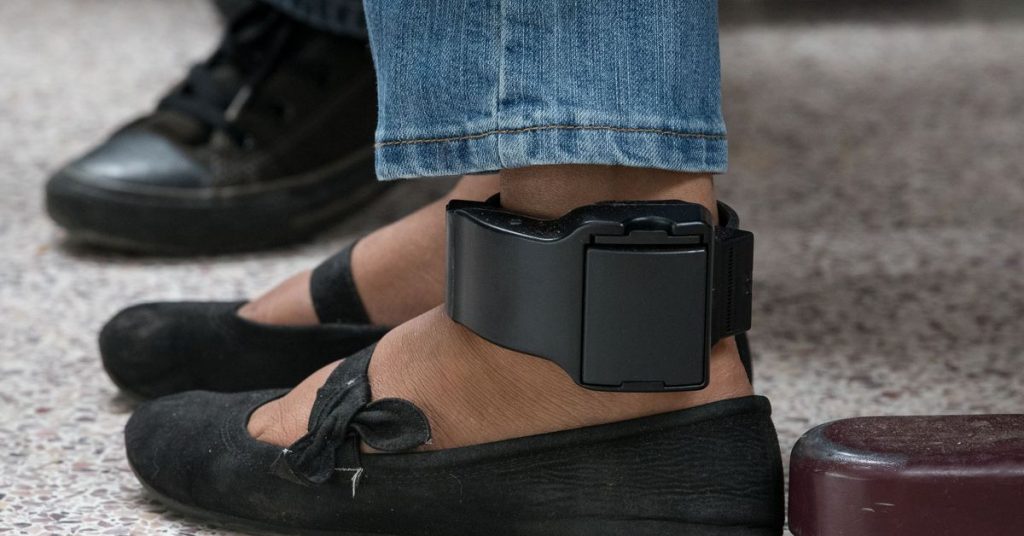 Some people see the rise in electronic monitors as a positive alternative to mass incarceration because it lets people pay their debt to society while still providing for their families, host Arielle Duhaime-Ross explains.

But as this episode of the Reset podcast uncovers, the technology of ankle monitors doesn’t actually work very well, which means it ends up having hugely negative impacts on the lives of the people it’s meant to be helping.

Sarah Faye Hanna, a 34-year-old mom from Pipe Creek, Texas, wears an ankle monitor as part of her three-year probation sentence. She was convicted of drug possession in 2018.

Hanna says her ankle monitor is about the size of a packet of cigarettes. It lights up green when her location is available and red when it isn’t — which happens more often than she’d like. When the ankle monitor loses its GPS signal; she has to walk around outside until the signal returns. She also has to spend long periods tethered to a wall while the ankle monitor charges, which can make taking care of her newborn tricky. Hanna pays $300 a month to have it.

“I just I hate it. It embarrasses me … I feel like it’s a little bit extreme. They don’t have justification to do this. I’ve gone to court. I’ve done everything that I’m supposed to do. It’s a lot of hassle and it’s super expensive. It’s an invasion of my privacy,” Hanna says.

There are many different reasons why people are ordered to wear ankle monitors. One is probation, as in Hanna’s case. People on parole may also have to wear them, after they have served their sentence. The US federal government uses them to monitor undocumented immigrants, as in the photo above. And people awaiting trial sometimes have to wear them, even though they don’t have a conviction.

Shubha Bala, director of technology at the Center for Court Innovation, describes a 2015 study she conducted with the New York County District Attorney’s office in which young people got the ankle monitors as a possible alternative to spending time in jail at Rikers Island. She observed that the monitors, which connected to the defendants’ phones, are often disruptive. In one instance, a student was kicked out of class because his phone had detected an issue with the monitor and it wouldn’t stop beeping.

Later in the episode, Duhaime-Ross has an in-depth discussion with Robert Gable, the man who —along with his brother — has been credited with conducting the first experiment on electronic monitoring in the 1960s, while the pair was studying at Harvard University.

Gable and his twin brother Ralph set out to see if they could stop young people from committing crimes through a number of interventions, including by monitoring their movements and giving them rewards for good behavior.

Listen to the entire conversation here. Below, we’ve also shared a lightly edited transcript of Bala’s conversation with Duhaime-Ross.

Listen and subscribe to Reset on Apple Podcasts, Stitcher, or Spotify.

I’ll often hear, “But isn’t electronic monitoring better than jail or better than prison?” That’s the wrong question. My really facetious example is: Giving people ponies is also better than being in jail. But we don’t do that because it’s just a useless alternative.

In 2015, Shubha studied the use of electronic monitoring within the criminal justice system in New York City. The District Attorney’s office of New York County was running a pilot program to test the use of ankle monitors on young people waiting for trial — people who might otherwise have had to spend time in New York City’s most infamous jail, Rikers Island.

The type of ankle monitor used in the program works by connecting to the wearer’s phone via Bluetooth.

We had one kid actually get kicked out of class because their phone kept going off. They couldn’t figure out why it was going off and the teacher said it was disruptive.

In New York, kids aren’t supposed to have phones in class at all. So what it meant is that we were already violating the kid’s right to privacy around these charges because we had to tell the teachers that they’d need to be able to keep their phone in class.

Now it’s beeping and disrupting classes. And this young adult, who is presumably being monitored in order to keep them in class, is now being kicked out of class because of this surveillance system.

There is a lot of nuance that doesn’t really get thought of. For [the purposes of our study], it rendered the technology ineffective because we had to make so many exceptions.

This was one example but there were so many times where we had to turn off any alerts during certain hours. Then what’s the point? Why bother having a monitor?

We ended up doing exactly what we did prior to electronic monitoring: having a relationship with the principals of the schools and getting the person’s attendance once a week.

The most old-school way of checking in is actually just saying, “Hey, principal, is this teen in class?”

So the same technology that was intended to make sure this student was in class became the reason he got kicked out. This student’s phone was going off in class because the ankle monitor was running out of battery and his phone was alerting him to charge it.

But his wasn’t the only problem the researchers encountered.

It only tracks people when it’s on or near the person and it has batteries and there’s GPS signal.

So that’s issue No. 1: it’s not a magic bullet that tracks where somebody is 24/7, constantly, no matter what.

It sounds like this pilot project that you ran in New York City was not super successful.

As a technologist and policy person, I would say it was really successful in that we learned a lot of important information.

But in terms of would we continue? Would I personally feel like electronic monitoring was a good way to continue? I would say no.

Some people see electronic monitoring as this magical way of knowing where someone is all the time. And that’s not what it is.

Despite all these problems, electronic monitors are currently used by the federal government, all 50 states, and the District of Columbia. But if the devices are so problematic, why are they being used so widely? And who’s profiting from that?

It makes sense. Hopefully we’re working on reducing the number of people that are in prison or jail, and that obviously really eats into your revenue if you’re running a prison or jail. This is a really great way to continue to grow and expand revenue even while people are not in jail or prison.

The decision makers — who I think are well-intentioned people — are not getting the actual nuance, complexity, and difficulty [monitors cause] for everybody.

After I spoke with Shubha, I had a question: How did we even get here? Who came up with this idea?

I actually talked to Robert Gable, a retired professor of psychology at Claremont Graduate University and one of the people who’s been credited with inventing the use of electronic monitoring in the 1960s. He has some complicated feelings about how the tech is used today.

To hear Duhaime-Ross’s interview with Gable, listen to the full episode and subscribe to Reset on Apple Podcasts, Stitcher, or Spotify.