The Hosts of ‘Back Issue’ Want to Throw It Back

Tracy Clayton and Josh Gwynn use their encyclopedic memory of pop culture moments as a balm in trying times. …

Remember when watching the sitcoms “Martin” and “Living Single” or the variety show “In Living Color” meant that it was the end of the day and it was time to have a laugh? Or when Tyra Banks gave her now iconic “We were rooting for you!” rant on “America’s Next Top Model?”

On “Back Issue,” a podcast produced by Pineapple Street Studios, Tracy Clayton, 38, and Josh Gwynn, 32, rewind to some of the pop culture moments they have always wanted to know more about, with an authority on the episode at their side.

During the first episode, which premiered in late August, Ms. Clayton and Mr. Gwynn discussed many of Ms. Banks’s decisions while she was at the helm of the “America’s Next Top Model” production with Jay Manuel, a creative director on the show. The second episode featured Tommy Davidson, a breakout star on “In Living Color.”

The hosts, who consumed the movies, music and television shows they discuss on their podcast separately back in the day, sound like siblings who shared the floor in front of their glowing television set and watched the events together. The pair worked together on “Strong Black Legends,” a Netflix podcast that focuses on famous Black actors, but never before as co-hosts.

Ms. Clayton got her start in audio in 2015, when BuzzFeed premiered “Another Round,” a podcast she hosted with Heben Nigatu. Featuring guests like Hillary Clinton and Issa Rae, it gained popularity quickly and was crowned the best of 2015 by iTunes, Slate and The Atlantic. Still, BuzzFeed pulled the plug on the show in 2017.

“It got really big and the money that we were 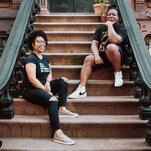