The ‘Joy and Envy’ of Vaccine FOMO

As some people start to shake off coronavirus precautions, those who are waiting their turn for a vaccine say the FOMO is real. “It’s like when every friend is getting engaged before you.” …

At the start of the year, Shay Fan felt relief: Vaccinations were on their way. Her relief turned to joy when her parents and in-laws got their shots.

Three months later, Ms. Fan, a 36-year-old freelance marketer and writer in Los Angeles, is still waiting for hers, and that joy is gone.

But scrolling through Instagram and seeing “people in Miami with no masks spraying Champagne into another person’s mouth,” while she sits in her apartment, having not had a haircut or been to a restaurant in more than a year, has made patience hard to practice. “It’s like when every friend is getting engaged before you, and you’re like, ‘Oh, I’m happy for them, but when is it my turn?’” she said.

For much of the pandemic, the same rules applied: Stay at home, wear a mask, wash your hands.

But now, with vaccine distribution ramping up in some areas but not others, the rules are diverging around the world, and even within the same country.

However, France, where only 14 percent of the population has received one vaccine dose, just entered its third lockdown. And India, which has given one dose to 5 percent of its population, on Monday reported 97,000 new cases, close to its highest since 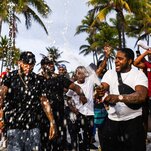