The Power Balance Is Shifting in London’s Commercial Real Estate

An extended winter lockdown has shaken the usual arrangement between landlords and tenants ahead of a government review of leasing legislation. …

LONDON — For years, landlords have had the upper hand in London’s real estate market, pushing up rents as businesses clamored for prime locations near offices, tourism hot spots and transport hubs and as the city’s population grew and grew. Restaurants were often locked into leases with clauses that allowed the rent to only go up. Retailers faced increasingly exorbitant rents.

Over the course of a year, the pandemic has brought a halt to this arrangement, shifting the power balance between commercial property tenants and landlords.

Confronting the alternative of having empty properties, some landlords have loosened their terms, with offers of rent holidays or other concessions. But in other cases, changes have been forced on property owners by struggling tenants who, in increasing numbers, have turned to an option in Britain’s insolvency law known as a company voluntary arrangement. The result has been slashed rents or a switch to leases that fluctuate based on the tenant’s earnings.

Seeing their prospects dwindle, some property owners are saying the leasing system is outdated and are calling for more transparency and cooperation with their tenants. And a coming legislative review by the British government could bring more change.

The relationship between tenants and landlords “has definitely become more fraught because of the pandemic,” said David Abramson, the founder and chief executive of Cedar Dean, which specializes in helping businesses restructure leases. “Landlords are not used to being in business with one hand behind their back. Generally, they’ve been the more dominating force, and it has been quite aggressive.”

Landlords had to have “a complete change of attitude,” Mr. Abramson said. “A lot of them are still getting their 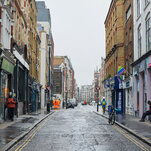