The Taliban Close In on Afghan Cities, Pushing the Country to the Brink

The Taliban have positioned themselves around several major population centers, including the capital of Kandahar Province, as the Biden administration weighs whether to withdraw or to stay. …

Though Taliban tactics vary from region to region, the outcomes are usually the same: increased taxation on highways, plummeting morale among the Afghan security forces with dwindling U.S. support and growing fear among those living in once-secure areas.

The Taliban’s aim is to force the Afghan government into complying with their terms of peace. In Qatar, Taliban leaders have demanded the release of around 7,000 more prisoners and the establishment of an interim government, two requests that Ashraf Ghani, Afghanistan’s president, has so far refused.

“The Taliban seem to believe that applying this pressure, staging their fighters to potentially strike Kandahar and other urban centers, will pressure the U.S. to withdraw, or else,” Mr. Watkins said. “The strategic logic might have the opposite effect.”

To prepare for a possible multipronged attack should the United States stay beyond the May 1 deadline, the Pentagon has requested additional military options — including an increase of U.S. troops or a commitment of more air support from U.S. Central Command, which oversees operations in the Middle East and Afghanistan, according to two U.S. officials. Whether these requests will be granted depends on the Biden administration’s next move, which is expected to be announced in coming weeks upon completing a review of the current agreement in place with the Taliban.

The unrest has already delayed the handover of Kandahar Airfield, a sprawling American base east of the capital, to Afghan forces in recent months. For now, a small detachment of U.S. and NATO troops remain to support the struggling Afghan forces, according to a U.S. military official.

With the police force mostly in ruin, the Afghan army and commandos have moved into Kandahar, beginning operations in November to retake territory that was then retaken by 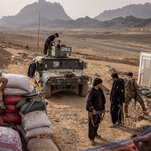