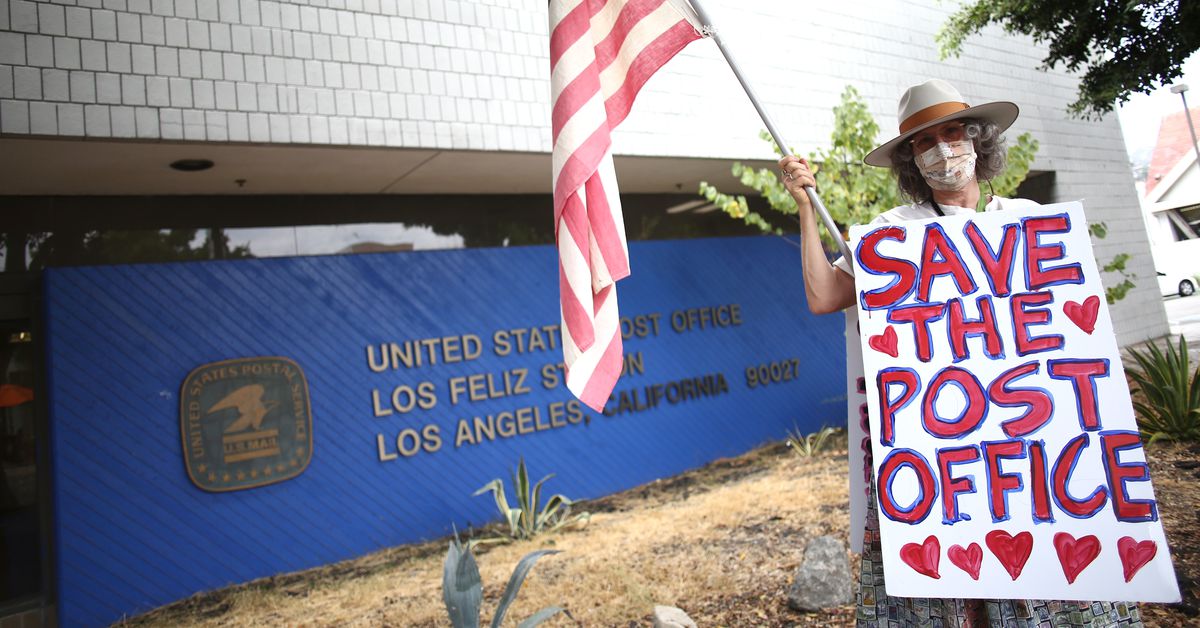 White House Chief of Staff Mark Meadows said in an interview on Sunday that US Postal Service mail-sorting machines will not be taken offline between now and Election Day — a statement at odds with reports that the Postal Service is decommissioning 10 percent of its machines this year under a new policy.

The way Meadows made the claim — by denying they were being removed in the first place, and making questionable claims in response to an on-air fact check by CNN’s Jake Tapper — left it unclear if he was actually pledging a reversal of the ongoing decommissioning of machines.

Some postal workers say the decommissioning of the machines — some of which would be sorting mail-in ballots — could hamstring the Postal Service’s ability to handle an unprecedented surge of absentee ballots in November’s election, and could contribute to the possibility of millions of voters being disenfranchised by an overwhelmed postal system.

On CNN’s State of the Union, Meadows first told Tapper that sorting machines being taken offline was “not happening” and that claims to the contrary were simply the product of Democrats trying to “stoke fear” with a “political narrative.”

Meadows went on to say that “the drawdown” of postal machines was initiated by the previous postmaster general, who had been appointed by President Barack Obama — seeming to suggest that some machines actually did go offline in the past, but under a policy that predates the Trump administration.

When Tapper persisted in asking why sorting machines have been taken offline recently under new rules, Meadows said, “Get your producer to share where exactly those sorting machines were taken offline. Let them whisper in your ear, because what I’m telling you is you’re picking up on a narrative that’s not based on facts.”

Later in the episode, after being updated by a producer, Tapper fulfilled Meadows’s request: He cited Chris Bentley, president of the National Postal Mail Handlers Union Local 297, which covers Kansas and part of Missouri, who told CNN that postal management “has already taken out four machines in Kansas City, two machines in Springfield, Missouri, and one machine in Wichita, Kansas, that is earlier this year — under this new postmaster general.”

But reports from NBC News, CNN, and the Washington Post indicate that 671 machines are being taken offline under a new policy. NBC reports that, according to internal Postal Service documents it obtained, the new postmaster general appointed by Trump in May, Louis DeJoy, is the one responsible for the decommissioning initiative. And postal workers say the process of taking machines out of service under this initiative began in June.

A Postal Service spokesperson told NBC News that the decommissioning was due to “Normal business adjustments!” and that equipment was being adjusted due to a decline in the volume of mail and an increase in the volume of packages.

But that policy has some postal workers concerned about their ability to process mail-in ballots, which are expected to surge to unprecedented levels this year due to the coronavirus pandemic. The Washington Post reports that the American Postal Workers Union has filed a grievance claiming that the decommissioning of the machines — which are “concentrated in high-population areas” — could hinder processing of election mail.

Experts on voting behavior have said that before the pandemic, an estimated 25 percent of voters would’ve been expected to cast their ballots by mail; they now estimate that 60 percent or more will attempt to vote by mail because the pandemic is discouraging in-person voting.

If Meadows is claiming that a new machine removal initiative doesn’t exist when in fact it does, then his promise that new ones won’t be taken offline is, at best, questionable. How can the White House reverse a policy it claims doesn’t exist?

Experts say the Postal Service is in dire financial shape, already struggling with serious delays, and that new cost-cutting policies imposed by DeJoy are likely to exacerbate the problem.

In July the US Postal Service warned 46 states and Washington, DC, that tens of millions of voters could effectively be disenfranchised because their mail-in ballots might not be processed speedily enough for November’s election — even if voters follow all their state’s election rules.

The agency told six states and DC that a narrow set of their voters could experience delayed ballots, according to the Washington Post. But for the remaining 40 states, the warning is far more serious: They were told that “long-standing deadlines for requesting, returning or counting ballots were ‘incongruous’ with mail service and that voters who send ballots in close to those deadlines may become disenfranchised,” the Post reports.

That heightened warning applies to 186 million potential voters who are spread across blue states, red states, and battleground states such as Pennsylvania, Michigan, and Wisconsin.

CNN reported on Saturday that the Postal Service’s internal watchdog is reviewing some of DeJoy’s new policies. (It’s also investigating his compliance with federal ethics rules due to the recent revelation of his multimillion-dollar stake in his former company, XPO Logistics, a Postal Service contractor, which has raised conflict-of-interest questions.)

Many of these issues could be solved by emergency funds that the Postal Service has been pleading for, and which House Democrats included in the coronavirus relief bill they passed in May.

During his interview on CNN, Meadows said that Trump is open to injecting emergency funds into the Postal Service if he can come to a fair deal with Democrats. But that contradicts Trump’s admission on Thursday that he opposes providing additional funding for the Postal Service because he doesn’t want everyone to be able to vote by mail.

Democrats “want three-and-a-half billion dollars for something that will turn out to be fraudulent, that’s election money, basically … [And] they want 25 billion dollars — billion — for the Post Office,” Trump said.

“Now they need that money in order to have the post office work so it can take all of these millions and millions of ballots,” Trump continued. “By the way, those are just two items, but if they don’t get those two items, that means you can’t have universal mail-in voting.”

Trump has persistently attempted to delegitimize the reliability of mail-in voting, describing it as acutely vulnerable to fraud — without presenting evidence and despite the consensus among voting rights experts that it’s secure when funded properly.

When CNN’s Tapper pointed out to Meadows on Sunday that there’s “no evidence of widespread voter fraud,” Meadows retorted: “There’s no evidence that there’s not either. That’s the definition of fraud, Jake.”