The Woman Taking Over TikTok at the Toughest Time

Vanessa Pappas is keeping a focus on the app’s community of creators and users as it deals with pressure from President Trump, Beijing and a possible sale. …

Six weeks ago, as TikTok grappled with escalating tensions between the United States and China, the social media app’s top executives huddled together to figure out their next steps.

Vanessa Pappas, 41, was worried. TikTok’s North American business, which she has run since 2018, was dealing with an uproar. President Trump had threatened to ban TikTok because of its Chinese owner, ByteDance, and many of the more than 100 million people who use TikTok in the United States were up in arms.

So in the early hours of Aug. 1, Ms. Pappas recorded a 59-second video from her home office in Los Angeles to calm the creators on TikTok and its fans. “We’ve heard your outpouring of support, and we wanted to say thank you,” she said in the video, which quickly went viral under the hashtag #SaveTikTok. “We’re not planning on going anywhere.”

he was leaving the company, citing its uncertain political status. Ms. Pappas was appointed TikTok’s interim global head, just as the app faces an even murkier future.

an executive order from President Trump, ByteDance must essentially strike a deal to sell off TikTok’s U.S. operations by Sept. 20; it will have a few weeks after that to close a sale. Yet after weeks of negotiations with potential buyers such as Microsoft, Walmart and Oracle, the discussions were thrown into disarray when the Chinese 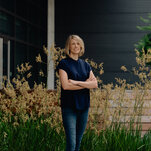