The World Shudders as President Trump Tests Positive for Covid-19

The news of an American president contracting a potentially lethal virus carried global repercussions beyond that of any other world leader. …

LONDON — President Trump’s disclosure that he had been infected by the coronavirus sent a shudder around the world on Friday, drawing sympathy from leaders who have grappled with the pandemic in their own countries and more pointed responses from critics who noted Mr. Trump’s cavalier handling of the threat.

Mr. Trump is not the first world leader to be stricken. Prime Minister Boris Johnson of Britain and President Jair Bolsonaro of Brazil both were infected — drawing an eerie link between three populist politicians whose countries have been particularly hard hit by the pandemic.

At 74, Mr. Trump is older and more vulnerable than either of those men. The news of an American president contracting a potentially lethal virus also carried global repercussions beyond what would be generated by any other world leader. Financial markets fell in Asia and wobbled in Europe and the United States, before steadying after the disclosure that Vice President Mike Pence had tested negative.

For allies and adversaries alike, there was a sense of shock as they woke up to the news on Friday — even after three and a half years in which many believed they had lost the capacity to be shocked by anything involving a president whose words and deeds have regularly rocked the international order.

From Mr. Johnson to President Vladimir V. Putin of Russia to Chancellor Angela Merkel of Germany, a host of foreign leaders voiced concern, sending Mr. Trump good wishes for his convalescence, as well as that of the first lady, Melania Trump, who was also infected.

“Hope they both have a speedy recovery from coronavirus,” Mr. Johnson said on Twitter, making no mention of 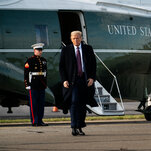