They Were Journalists, and Women, and Targeted for Both

As Afghanistan enters a desperate chapter, with U.S. troops potentially on the way out, insurgents are pressing a deadly campaign to silence the media and keep women home. …

Though she noted that she was unaware of the station receiving any threats specific to the murdered women or female employees generally, “Being a journalist in Afghanistan is a risk. There’s no other way to put it,” she said. “Even just going to work or walking home from work, as we saw happen yesterday, can pose a risk.”

Since 2018, more than 30 media employees and journalists have been killed in Afghanistan, according to a recent United Nations report. It has been particularly bad for them, and for other civil society figures, during an increase in targeted killings documented by The New York Times since peace negotiations started in September 2020.

“I feel like we’re living in a horror movie these days,” said Rada Akbar, a Kabul-based photojournalist and artist. “So many people left the country. A lot of people got killed. And everyone else who is in the city is just …” she trailed off, then continued. “Everyone is so silent. It’s very scary.”

‘A Warning to Me’

Mariam Alimi, a Kabul-based photojournalist, remembers the precise moment she heard that the three media workers in Jalalabad had been killed. “I was at my brother’s house,” she said. “I heard that three journalists had been killed, so I switched on the TV, and saw the story.”

The news, she said, was “a warning to me.” She travels throughout the country for her work, often alone. For years, she said, she felt safe enough doing so that she preferred to drive to assignments across the country rather than fly, which she considered a hassle. More recently, however, she has been threatened and followed by unknown men while on assignment. Her clients have canceled assignments and 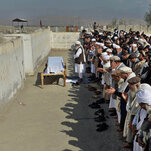