This is the most important movie weekend of the year 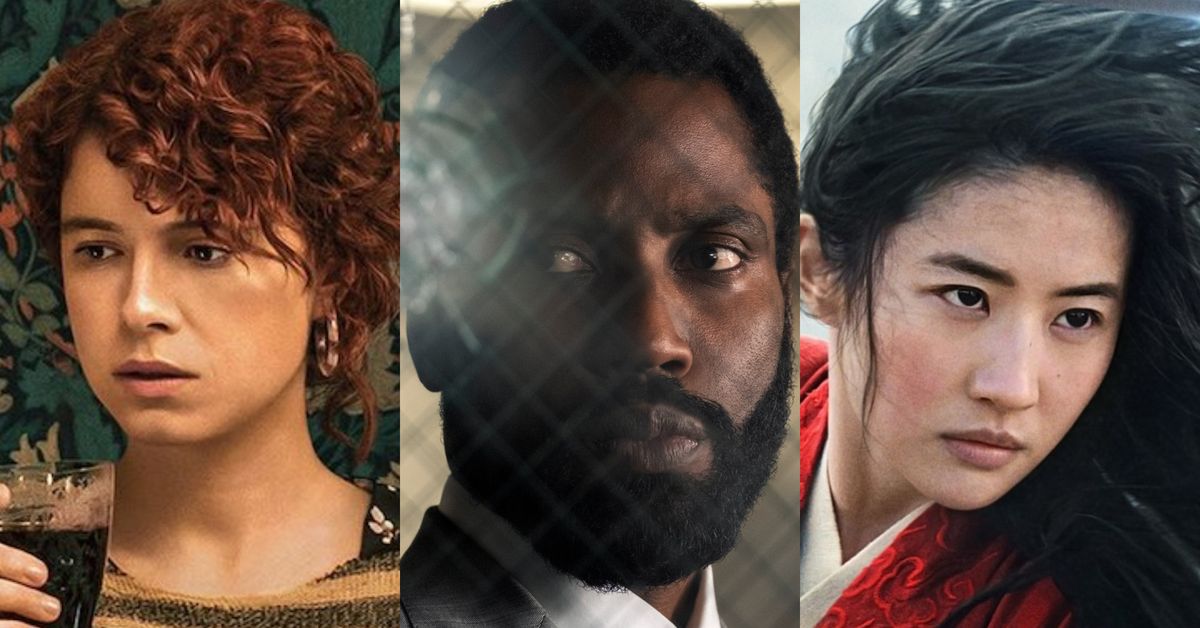 Labor Day weekend, the last official weekend of summer, isn’t typically the biggest movie weekend of the year. Usually, most of the big summer blockbusters have already come out, people are squeezing in their last beach trips and barbecues, and movie theaters are looking ahead to the hefty fall season.

But nothing is typical in 2020. Due to the Covid-19 pandemic, summer blockbusters didn’t happen. Movie theaters haven’t been open for most of the summer, and in some places, they’re still closed.

And with the film industry in turmoil and the pandemic still ongoing, how their debuts shake out may tell us a lot about the future of movie-watching, at least in the near term.

So here’s your guide to this weekend’s three biggest titles, why each one matters, and what they could mean for Hollywood.

Tenet: An ambitious Christopher Nolan thriller playing only where theaters are open

Read my review of Tenet and learn about the ancient palindrome square that unlocks it.

Tenet is Christopher Nolan’s sleek, stylish spy thriller, a mind-bending tale in which the movement of time is a key element. John David Washington, Robert Pattinson, Elizabeth Debicki, and Kenneth Branagh star in the film, which plumbs questions about fate, faith, and memory in a way that falls in line with Nolan’s past work.

But Tenet’s lasting legacy may not be the film itself. It’s the first Hollywood blockbuster to hit theaters following the worldwide shutdown caused by the pandemic, and for most of its audience, it’s likely the first movie they’ll have seen in a theater since at least the spring. (Movie theaters in China shut down in January.)

That means Hollywood will be watching closely to see what happens. Theaters are opening with reduced audience capacities, assigned seating, and enhanced cleaning protocols, which means far fewer people will be able to see it on opening weekend than might have packed into multiplexes in a previous year. After several delays from its planned July release date, the movie opened abroad on August 26 and did reasonably well, grossing about $53 million in its opening weekend, higher than analysts’ projected $40 million.

That likely bodes well for its US release, despite the still-dire nature of the Covid-19 infection rate in many states. Tenet began rolling out in American theaters on September 3, with some preview screenings at select theaters beginning earlier in the week. If it performs well — even with theaters in the major markets of New York and Los Angeles still closed — then it will signal that American audiences are ready to return to theaters, whatever the risk. And that will allow studios to confidently forge ahead in releasing other blockbusters, like Wonder Woman 1984 (currently scheduled for October 2), provided theaters stay open in most of the country.

Tenet is best for: Viewers who feel comfortable going to a theater, or who have access to a drive-in screening, and who want a mind-bending ride through at least a few of the mysteries of the universe.

The live-action remake of the 1998 animated film, Mulan stars Liu Yifei as a young woman in imperial China who disguises herself as a man so she can take her aging father’s place in the emperor’s army. Like Tenet, Mulan had its release date moved several times, but parent company Disney decided to take a different approach to its release.

Instead of planning a staggered release, in which the movie would roll out in different countries at different times, Mulan is launching worldwide on September 4. In countries where the subscription-based Disney+ streaming service exists, the film will be available to subscribers on release day for an extra $29.99. Those who choose to pay the extra fee will have access to the film three months before it becomes available to all Disney+ subscribers in December. In regions where Disney+ is not available — notably, China — the film will open in theaters, provided theaters are open.

It’s a different sort of release strategy than we’ve seen before. In the past, smaller films and independent releases have sometimes engaged in a “day-and-date” release, in which a movie opens in select theaters and on digital platforms simultaneously. But a movie like Mulan, which would’ve likely done great business in a movie theater in normal times, is a different matter altogether.

Only Disney will really know how well its experiment in paid “premium access” to a movie, available only to people who already subscribe to its streaming service, will be. If it’s a flop, we probably will never learn how many people took advantage. If it’s successful, though, the company will likely tout the numbers, and competitors will take note. Many film studios have connections to specific streaming platforms; Warner Bros. owns HBO Max, Universal Pictures has Peacock, and between Pixar, the Marvel Cinematic Universe, Searchlight, and its own films, Disney owns seemingly half the movies that come out in multiplexes every year, which it can then funnel to Disney+. A premium release strategy could become a way of extracting dollars from people who can’t go to theaters or prefer not to, even when the pandemic is finally in our collective rearview mirrors.

Mulan is best for: Disney+ subscribers — or people who’ve been thinking about subscribing to Disney+ — who are both willing to drop an extra $30 for a few months of early access to the film, and who are excited to see the animated 1998 Mulan reinterpreted.

Opening a movie on a streaming service only — and skipping theaters entirely — is not a new approach. Netflix has been doing it for years. But theaters still usually lead most movies’ release plans — especially movies that boast buzzy filmmakers or big stars.

Yet Netflix has been courting major filmmakers for awhile. Earlier this summer, the company released Spike Lee’s latest, the masterful Da 5 Bloods. It released Noah Baumbach’s last two movies, including 2019’s Marriage Story, and it even managed to lure Martin Scorsese for The Irishman. Well-respected directors like Ava DuVernay, Bong Joon-ho, Alfonso Cuarón, Nicole Holofcener, and Tamara Jenkins, have worked with Netflix, wooed by the company’s deep pockets and promise of creative freedom.

But this weekend marks the launch of Netflix’s ambitious fall slate, with I’m Thinking of Ending Things. The film is written and directed by Charlie Kaufman, who wrote movies like Being John Malkovich (1999), Adaptation (2002), and Eternal Sunshine of the Spotless Mind (2004), and more recently wrote and directed Synecdoche, New York (2008) and Anomalisa (2016). (His debut novel Antkind came out in July.)

Kaufman is so tightly associated with a kind of brain-twisting, darkly comical metaphysical and existential style that it’s possible to talk about movies being “Kaufman-esque,” meaning they’re weird, a bit confusing, and usually pretty heartbreaking. I’m Thinking of Ending Things, based on Iain Reid’s 2016 novel, is a strange and moving film about a young woman (Jessie Buckley) whose name seems fluid — is she Lucy? Louisa? Lucia? — but is nevertheless our narrator. We hear her thoughts as she joins her boyfriend of seven weeks, Jake (Jesse Plemons), on a short trip to visit his parents at their farmhouse. But when she arrives, time and reality start slipping, and the movie becomes a reflection on relationships, our life choices, the impossibility of making or saying anything original in a world flooded with art, and the ways the past, present, and future fold in on one another when we step into familiar places.

I’m Thinking of Ending Things is the first in Netflix’s awards-season slate, which also includes Antonio Campos’s The Devil All the Time (September 16), Broadway adaptation The Boys in the Band (September 30), Kirsten Johnson’s Dick Johnson Is Dead (October 2), Aaron Sorkin’s The Trial of the Chicago 7 (October 16), another adaptation of Daphne du Maurier’s novel Rebecca (October 21), Ron Howard’s Hillbilly Elegy (November TBD), David Fincher’s Mank (this fall), and Ma Rainey’s Black Bottom (November 27), which is not only based on an August Wilson play but also the late Chadwick Boseman’s final film role.

And while I’m Thinking of Ending Things’ Netflix-only release isn’t in itself breaking new ground, it represents a third release option that film studios have been experimenting with. While Mulan is blockbuster material with wide appeal, a movie like Kaufman’s has a smaller, but very passionate, built-in audience attuned to art-house fare. Netflix has been working hard to find ways to keep that audience engaged while also turning out dance movies, rom-coms, action flicks, international cinema, and every other genre imaginable — all in an effort to become a one-stop shop that can rival and overtake its competitors.

I’m Thinking of Ending Things is best for: Netflix subscribers who are fans of Charlie Kaufman’s breed of puzzling films that question the nature of existence. (If you prefer straightforward plots, stay away.)

How to watch it: I’m Thinking of Ending Things is streaming on Netflix.

Other new and notable films coming out this weekend