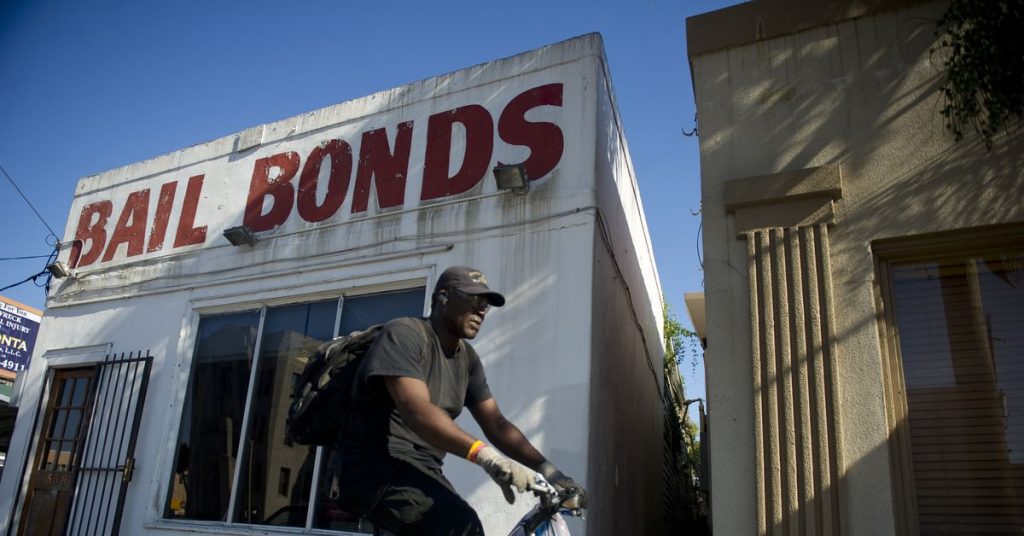 Pretrial detention, or keeping a person who has been accused of a crime in jail until their trial, is a common practice.

It’s been touted as a way to both ensure public safety and get people to appear in court.

But a growing body of research suggests that its effectiveness has been overstated — and that this practice is causing serious harm to the hundreds of thousands of unconvicted people pushed into jails largely because they can’t afford to pay the bail money required to remain free.

A new report on pretrial detention released by the Vera Institute of Justice shows that this type of detention has an especially severe effect on marginalized communities — like poor people, women, and black and Latino people. “People who cannot afford to post bail—in particular, people from poor communities—remain in jail, often until their cases are resolved, while those who have access to financial resources are able to secure their liberty,” the authors of the report point out.

This isn’t just a temporary hardship, either. According to the Vera Institute, people detained for longer periods are more likely to be convicted and receive harsher sentences than people who pay the required bail fees and are released or are never required to pay bail in the first place. The Vera report notes that these consequences seem to increase the likelihood that a person will reenter the justice system once they are released.

What’s more, the report suggests that pretrial detention policies may not actually be increasing public safety, or increasing the rate at which accused people show up for their court dates. It raises some serious questions about why pretrial detention is expanding, and what should be done instead.

According to the Vera report, the number of people being detained before trial increased by a whopping 433 percent between 1970 and 2015. Of the 740,000 people currently sitting in jails around the country, about two-thirds of them have not been convicted of a crime.

One significant reason for this huge increase is that more and more local jurisdictions are requiring that people who have been arrested and accused of a crime — even relatively low-level offenses — pay bail money upfront in order to be released until the trial takes place.

Bail can take several forms. In some cases, people pay the full amount ordered by the court in cash. In others, they are simply released without having to pay anything upfront. Or they might instead put up collateral and personal property that can be seized if they fail to make court appearances.

Here’s how the process usually goes: A judge (usually relying on a set of standard bail amounts based on if an offense is a felony or a misdemeanor) sets a certain amount of money that a person must pay before they can be released, and the court says they’ll give them the money back if they show up for court.

Because these amounts are often quite high (the average bail for a felony is between $10,000 and $12,000), individuals or families often turn to a bail bondsman, a person who fronts most of the money while also charging a nonrefundable premium (usually 10 percent of the bail amount).

There are two connected problems here. First, judges often set bail without making a detailed consideration about whether a person is a threat to public safety or would fail to appear in court. Second, a judge may order bail without considering if the person can afford the amount being set. In other words, bail is being requested in some cases where it isn’t needed — and judges are requesting too much of it from people who can’t afford to pay it.

This is a big shift from how bail worked long ago.

In the past, most people were released from jail to await their court hearing without having to pay upfront, though they had to promise that they or a family member would pay the money if they failed to show up. But by the 1800s, a decline in the number of people able to get a loved one or friend to agree to pay back bail fueled the private bail industry’s growth, culminating in today’s system, where large amounts of money are requested upfront.

The system began facing calls for reform as early as the 1920s. A key change came with the 1966 Bail Reform Act, which stated that a person should be released under the “least restrictive conditions” that still ensured they would appear in court. But these measures did not end the use of money bail in the following decades.

Here’s how Stephanie Wykstra explained the issue for Vox in 2018:

In the 1970s and ’80s, fear of rising crime led to the Bail Reform Act of 1984. The act allowed a judge in a federal court to detain someone either for flight risk — that is, if there was convincing evidence that they would abscond if released — or if they were assessed to be a serious threat to public safety. Many states adopted similar statutes in the ’70s and ’80s. A few years later, the Supreme Court in United States v. Salerno affirmed the constitutionality of detaining someone for reasons of public safety, while also making it clear that “in our society liberty is the norm,” and detaining someone prior to trial is the “carefully limited exception.”

Nearly 30 years later, pretrial detainment is not a “carefully limited exception.” Judges routinely assign bail that people can’t afford to pay. Between 1990 and 2009, releases in which courts used money bail in felony cases rose from 37 percent to 61 percent.

These changes have created a system marked by wealth disparity, where a large number of people sitting in jails have been accused of committing minor offenses and don’t have access to money, while wealthier people who may have been accused of much more serious crimes are free to go about their lives before trial.

“There’s no logical tie between money and public safety,” says Insha Rahman, director of strategy and new initiatives for the Vera Institute. “Just because you’re rich doesn’t mean you’re less of a threat to anybody than if you’re poor.”

The authors of the Vera Institute report say there’s “little evidence” of bail’s effectiveness to get a person to appear in court. They cite various studies to explain their conclusion.

In one example, the report cites a 2013 Colorado study that reviewed nearly 2,000 cases and found no difference in court appearance rates between people who were ordered to pay before their release and people who were instead told to pay only if they failed to show up for court.

More recently, a February study from researchers at the University of Pennsylvania and George Mason University found that the elimination of cash bail for dozens of offenses in Philadelphia had zero effect on court appearance rates.

This suggests that a key line of reasoning in favor of requiring a person to either pay bail or remain in pretrial detention — that they incentivize a person to appear in court — does not actually hold up.

These studies help bolster arguments for bail reform, an issue that has seen increased attention from both sides of the political aisle in recent years, with states like New Jersey and California moving to fully eliminate cash bail. But the Vera Institute report finds that bail reform is only part of the problem: the second is that the use of pretrial detention itself is also in need of serious changes.

“The issue isn’t just about eliminating money bail, but also about promoting measures that will result in fewer people behind bars,” Rahman says.

Research has also found that longer periods of pretrial detention appear to increase both the likelihood of a person being convicted, and the length of the sentence they receive when they are. This could be because people detained longer are more likely to take plea deals, or have more difficulty consulting with lawyers and preparing for trial.

Being detained can also make it harder for a person to earn the money needed to pay for defense attorneys or for a person to do the sorts of “good behavior” measures that often lead to a reduced sentence or acquittal (things like volunteering, paying restitution, getting a job or additional education, or seeking mental health or drug treatment.)

As for people of color, reports from organizations like the Justice Policy Institute have found that race influences how much bail is set, severity of charges, and lengths of sentences, with black and Latino people often being penalized at higher rates than whites.

There are ways to change pretrial detention, but it’s complicated

Criminal justice reform advocates say this is not how the system is supposed to work, and they have proposed a number of changes that could increase the likelihood that someone will show up for their court date without requiring they pay large amounts of cash bail or forcibly detaining them before trial.

These include “proactive measures,” like addressing any issues with childcare or lack of transportation that could cause someone to miss their court date; holding “meaningful bail hearings” where a judge is given time to consider a person’s ability to pay before setting a bail amount; using pretrial supervision rather than detention; and sending court date reminders.

But while some of these solutions may be straightforward, enacting them can be — surprise! — complicated. Judicial processes give judges, police officers, and attorneys a high amount of discretion, and the exact processes can vary significantly across jurisdictions, meaning that solutions must be tailored to fit the specific needs of a given area or system. Another issue: The current discussion of criminal justice reform has largely highlighted problems further on in the process, like sentencing and the use of solitary confinement, rather than earlier ones.

“In recent years, much of the conversation [about the criminal justice system] was on the back end,” says Laurie Garduque, criminal justice director at the MacArthur Foundation, which partnered with the Vera Institute on the recent report.

Still, some proposals to address these front-end issues carry their own complications. Take risk assessments, which examine a person’s record to determine if a person is likely to cause public harm or pose a flight risk if they are released before trial. These assessments have been proposed as a way to get more people charged with low-level offenses released — but some civil rights groups say that the assessments can be biased against people of color.

What is clear is that the current system is not working, leaving reform advocates to argue that the goal must be a system that is ultimately smaller, one that provides more helpful services, focuses less on punishment, and puts fewer people behind bars.

“Most people actually need very little [supervision],” Rahman explains. “They need court reminders, transportation, but they don’t need the drug testing, supervision, the check-ins every week, or electronic monitoring. That should really be reserved for those posing the highest risk.”