The health workers were part of the government’s polio vaccine campaign in Jalalabad, a city which has seen numerous attacks on women in recent months. …

KABUL, Afghanistan — Three health workers, all women, working for the government’s polio vaccine campaign were shot dead in Jalalabad in eastern Afghanistan on Tuesday, local officials said, only weeks after three women working in television were killed in the same city.

The women, all in their 20s, were going about their jobs in the bustling town near the border with Pakistan when they were gunned down in two separate attacks.

Semin, 24, and Basira, 20, who like many Afghans both went by only one name, were shot and killed by two gunmen as they entered a house in Jalalabad to vaccinate the children who lived there, the governor’s office said.

The two were going door to door in the city, a practice the Taliban have banned in the past in areas under their control.

Global Polio Eradication Initiative, is one of two countries where the disease has not been eradicated, trailing behind Pakistan.

Around the same time as Tuesday’s shootings, there was an explosion at the city’s regional hospital, officials said, in front of the compound where the vaccines are stored. There 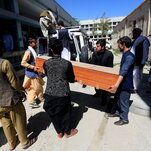