The national rail authority said “unknown actors” had activated brakes on one train, which was hit by another behind it. The country’s railways have been plagued by poor maintenance and mismanagement. …

CAIRO — Two trains collided in southern Egypt on Friday, killing at least 32 people and injuring more than 160 in the latest disaster to strike a railway system that has long been plagued by accidents, poor maintenance and mismanagement.

It was not immediately clear whether the authorities suspected sabotage or an accident. But the Egyptian National Railways said someone had activated the emergency brakes in some cars on one train and another train coming from behind crashed into it, causing two passenger cars to overturn.

Tens of ambulances rushed to the scene near the city of Sohag on the Nile, about six hours’ drive south of Cairo. A video shot by a passenger and posted online showed a frantic scene inside one of the cars, where people appeared to be trapped.

“Save us,” one of the passengers is heard screaming. “We can’t get the people out.”

President Abdel Fattah el-Sisi of Egypt promised in a post on his official Twitter page to penalize those responsible. “The pain in our hearts today will only increase our resolve to end such disasters,” he said.

Egypt’s creaking railways have a terrible safety record, with deadly crashes, fires and collisions at signal crossings a frequent occurrence. In 2002, the country’s worst rail disaster claimed more than 300 lives when a fire erupted on a speeding train traveling to Cairo from southern Egypt. 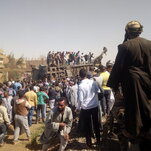