Trump Announces Sudan Will Move to Normalize Relations With Israel

But the deal appears to fall short of full diplomatic ties, since there was no mention of opening embassies in the others’ capitals, as Israel is planning to do with the United Arab Emirates and Bahrain. …

WASHINGTON — President Trump announced on Friday that Israel and Sudan have opened economic ties as a pathway toward normalized relations, with Sudan becoming the third Arab state to formally set aside hostilities in recent weeks as the president looks to score a final foreign policy achievement ahead of the election.

The deal, however, appeared to stop short of establishing full diplomatic recognition between the two countries, as Israel recently has with the United Arab Emirates and Bahrain — despite Mr. Trump’s description of it as a major agreement.

“HUGE win today for the United States and for peace in the world,” Mr. Trump wrote on Twitter.

Announcing the deal in the Oval Office — while on a conference call with Prime Minister Benjamin Netanyahu of Israel and Sudan’s civilian and military leaders, Prime Minister Abdalla Hamdok and General Abdel Fattah al-Burhan — Mr. Trump did not respond when asked if the accord amounted to full diplomatic normalization between Sudan and Israel.

A joint statement from all three countries that was released by the White House made no mention of Sudan and Israel opening embassies in one another’s capitals, and a senior Trump administration official said doing so has not been a part of the negotiations.

That ambiguity appeared to reflect the wider reluctance of Sudan, where public hostility to Israel runs deep. A senior Sudanese official said his government had bowed to months of American pressure over Israel, despite fears of a domestic backlash, in return for Sudan’s removal from an American list of state sponsors of terrorism. Sudan has been on the list since 1993, accused of supporting groups like Hamas 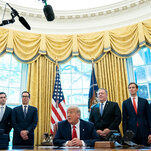