Trump congratulates the No. 2 NFL Draft pick, a supporter who called Kaepernick a “clown” 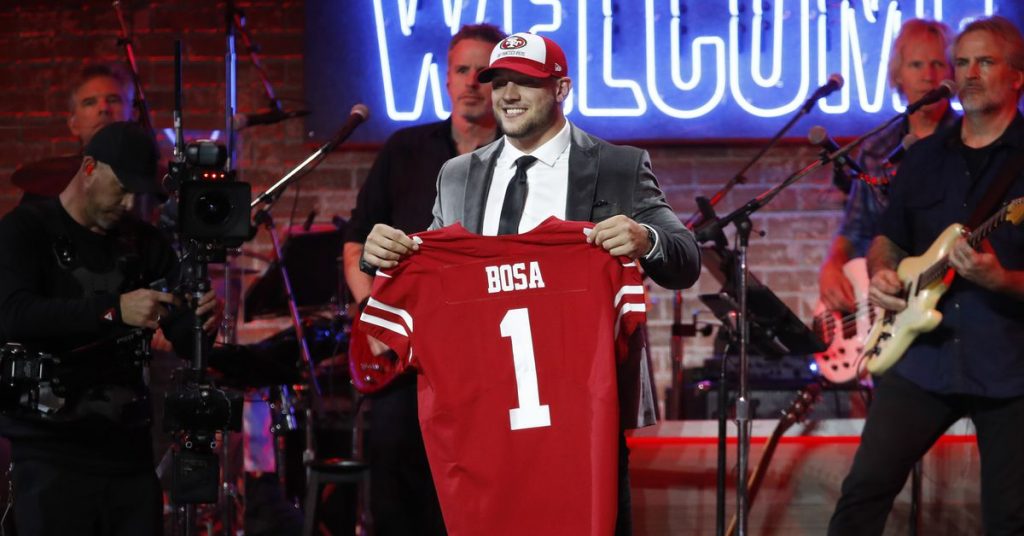 Congratulations to Nick Bosa on being picked number two in the NFL Draft. You will be a great player for years to come, maybe one of the best. Big Talent! San Francisco will embrace you but most importantly, always stay true to yourself. MAKE AMERICA GREAT AGAIN!

The president did not congratulate the number one draft pick, Oklahoma quaterback and Heisman Trophy winner Kyler Murray. Murray was chosen by the Arizona Cardinals, and is the first athlete to be drafted in the Top 10 of both the NFL and Major League Baseball drafts. He signed a $4.6 million contract with the Oakland Athletics last year but will forfeit the remainder to play in the NFL.

Bosa, who was picked by the San Francisco 49ers, has tweeted favorable things about Trump in the past. He has also called former NFL quarterback Colin Kaepernick a “clown” on social media.

Kaepernick played for Bosa’s new team in 2016 and began to protest police brutality by kneeling during the national anthem, which is played before each game. After leaving the 49ers, Kaepernick was not signed by a new team, and he sued the NFL, arguing owners blacklisted him. He reached a settlement with the NFL in February.

Trump criticized Kaepernick and the players who later joined him in taking a knee both in tweets and speeches. The president told an Alabama crowd in 2017 team owners should respond to kneeling by saying, “Get that son of a bitch off the field right now, he’s fired. He’s fired!”

Bosa has a history of liking and following Instagram accounts featuring racist and homophobic language. While he called Kaepernick a “clown” on Twitter, the footballer had kind words for Donald Trump and Ronald Regan, who he reportedly referred to as a “GOATs,” meaning “greatest of all time.”

Bosa deleted his social media posts prior to the NFL Draft, and explained his reasoning to ESPN.

While Bosa will be playing for Kaepernick’s old team, several sports journalists, including ESPN’s Todd McShay, have said the defensive end’s controversial social media presence is unlikely to affect his future in the NFL.

“I can’t imagine — and I’ve talked to some teams — a team saying we’re gonna pass on this guy because he’s left or right wing,” McShay said.

In an interview with NFL.com following the draft, Bosa struck a conciliatory tone and said he hoped to grow as a person with the 49ers.

“I’m sorry if I hurt anybody,” Bosa said. “I definitely didn’t intend for that to be the case. I think me being [in San Francisco] is even better for me as a person because I don’t think there’s anywhere, any city, that you could really be in that would help you grow as much as this one will. I’m going to be surrounded with people of all different kinds, so I’m going to grow as a person. I’m going to be on my own. I’m going to grow up, I’m gonna learn a lot of new things. It’s exciting.”