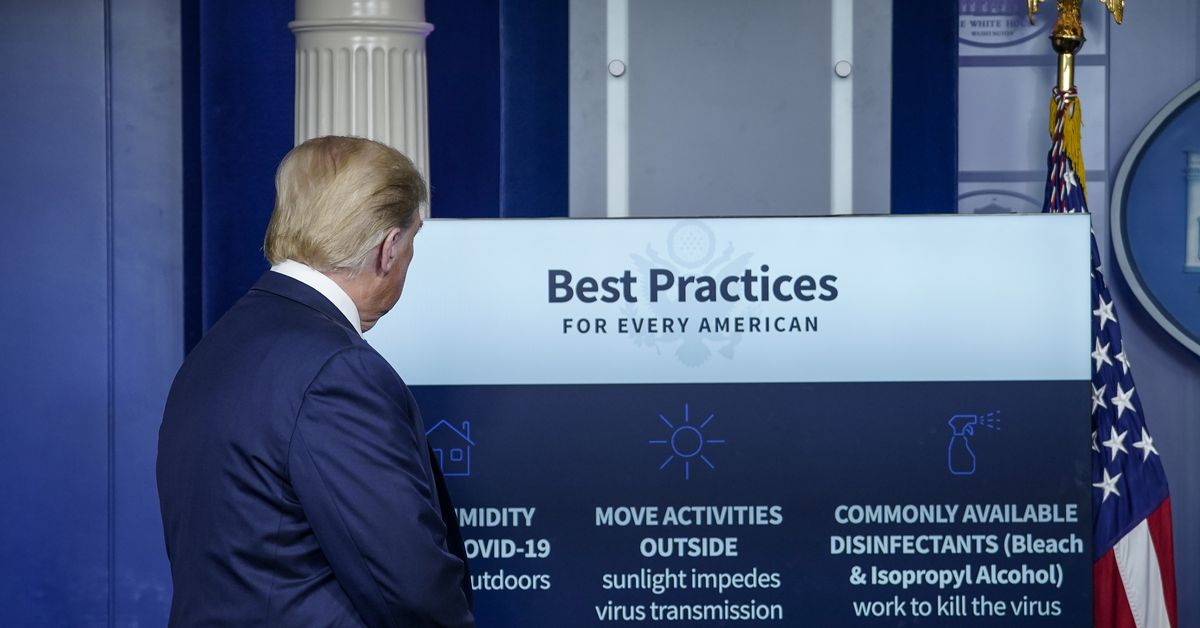 With his hype for hydroxychloroquine in the rearview mirror, President Donald Trump used Thursday’s White House press briefing to muse about whether disinfectants and sunlight might be the new miracle coronavirus cures of the moment — much to the bewilderment of Dr. Deborah Birx.

At the briefing, William Bryan, under secretary for Science and Technology at the Department of Homeland Security (DHS), discussed preliminary government research indicating that “heat and humidity suppress Covid-19” and “commonly available disinfectants work to kill the virus.”

After Bryan’s presentation, Trump took to the podium and made a deeply bizarre inference.

“Supposing we hit the body with a tremendous, whether it’s ultraviolet or just very powerful light … and then I said supposing you brought the light inside the body, which you can do either through the skin or in some other way. And I think you said you’re gonna test that,” Trump said, addressing Bryan. “And then I see disinfectant, where it knocks it [coronavirus] out in a minute — one minute — and is there a way we can do something like that by injection inside, or almost a cleaning. Because you see it gets in the lungs and it does a tremendous number on the lungs, so it’d be interesting to check that. So, that you’re going to have to use medical doctors with, but it sounds interesting to me.”

“The disinfectant, where it knocks it out in a minute, and is there a way we can do something like that by injection inside, or almost a cleaning. It gets in the lungs” — Trump seems to suggests that injecting disinfectant inside people could be a treatment for the coronavirus pic.twitter.com/amis9Rphsm

While there is a lot we don’t yet know about the coronavirus, it is highly unlikely that injecting humans with disinfectants will turn out to be a safe or effective treatment.

But if his ill-fated push for hydroxychloroquine wasn’t already proof, Trump made it abundantly clear during Thursday’s briefing that he has no qualms about making huge leaps of faith to sell some hope.

And he didn’t stop there.

At the same time that his own government is urging people to stay in their homes to slow the spread of coronavirus, Trump seized upon DHS’s preliminary finding that sunlight helps kill the virus and said, “I think a lot of people are gonna go outside all of the sudden.”

He then attacked Washington Post reporter Philip Rucker after Rucker advised him, “People tuning into these briefings — they want to get information and guidance and want to know what to do. They’re not looking for rumors.”

“I’m the president and you’re fake news,” Trump said, adding that his comments “are just a suggestion.”

There are indications that people do take Trump more seriously than they should. For instance, during the weeks in which Trump was pushing hydroxychloroquine at every opportunity, an Arizona man died after he tried to self-medicate with chloroquine phosphate. The man’s wife told NBC that she took the drug with her husband because they were thinking, “Hey, isn’t that the stuff they’re talking about on TV?”

At another point during Thursday’s briefing, Trump told Dr. Deborah Birx, coordinator of the coronavirus task force, “I would like you to speak to the medical doctors to see if there’s any way that you can apply light and heat to cure [coronavirus] … I’m not a doctor, but I’m, like, a person who has a good you know what.”

The ensuing expression on Birx’s face was akin to a parent trying to stay patient with a child as they spout complete nonsense. Watch:

Get a load of Dr. Birx’s demeanor after Trump tells her, “I would like you to speak to the medical doctors to see if there’s any way that you can apply light and heat to cure [coronavirus].” pic.twitter.com/TP0QoSzkYl

While the totality of Trump’s comments suggest he’s hoping to find new potential miracles to take the place of hydroxychloroquine — an anti-malarial drug whose potential as a coronavirus treatment was further diminished this week after a study of coronavirus patients at US Department of Veterans Affairs hospitals found it’s not only not beneficial but also potentially dangerous — Trump wants you to believe that there’s actually been no shift in his attitude.

Asked by Rucker why he stopped promoting hydroxychloroquine, Trump claimed he “hasn’t at all.” But CNN has receipts proving that’s not true.

Trump told even bigger lies on Thursday. At one point he claimed, “statistically we are doing phenomenally, in terms of mortality … when you look, Germany and ourselves are doing very well.” But Germany has had just over 5,500 coronavirus deaths as of April 23; the United States, by contrast, leads the world with over 49,600.