In a statement, a spokesman for the federal health department said that nearly 13 million doses were made available to states so they could order their first and second doses, which is “millions more” than previous weeks. The spokesman, Michael Pratt, also said that many states have not ordered up to the full amount that they have been allocated by the federal government.

“I think states have been doing their best to plan with whatever information they can get from the feds on expected future allocations, and then revising those plans if they get less,” said Dr. Marcus Plescia, the chief medical officer for the Association of State and Territorial Health Officials. “What is more concerning is that public expectations have been raised and limited supply may lead to significant disappointment.”

During the first few weeks of distribution, Gen. Gustave F. Perna, the chief operating officer of Operation Warp Speed, the federal effort to develop and distribute a vaccine to the American public, decided to hold back half of the weekly shipments of vaccine to save those doses for the people who had received an initial shot. He said at the time that it was important to be cautious as manufacturing was getting underway, and to hold onto a stockpile of second doses in the case of any manufacturing glitches.

Even then, his decision came under criticism by public health experts who argued that the focus should be on getting as many people as possible their first dose of a vaccine — since clinical trials showed even the first dose offers some protection — given that the country was facing record cases, hospitalizations and deaths.

But federal officials stuck to their plan, and as the weeks passed, that stockpile 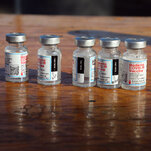