As he raises questions about his opponent’s standing with China, President Trump’s taxes reveal details about his own activities there, including a previously unknown bank account. …

Follow our live coverage of the Biden vs. Trump 2020 election here.

President Trump and his allies have tried to paint the Democratic nominee, Joseph R. Biden Jr., as soft on China, in part by pointing to his son’s business dealings there.

Senate Republicans produced a report asserting, among other things, that Mr. Biden’s son Hunter “opened a bank account” with a Chinese businessman, part of what it said were his numerous connections to “foreign nationals and foreign governments across the globe.”

But Mr. Trump’s own business history is filled with overseas financial deals, and some have involved the Chinese state. He spent a decade unsuccessfully pursuing projects in China, operating an office there during his first run for president and forging a partnership with a major government-controlled company.

And it turns out that China is one of only three foreign nations — the others are Britain and Ireland — where Mr. Trump maintains a bank account, according to an analysis of the president’s tax records, which were obtained by The New York Times. The foreign accounts do not show up on Mr. Trump’s public financial disclosures, where he must list personal assets, because they are held under corporate names. The identities of the financial institutions are not clear.

The Chinese account is controlled by Trump International Hotels Management L.L.C., which the tax records show paid $188,561 in taxes in China while pursuing licensing deals there from 2013 to 2015.

The tax records do not include details on how much money may have passed through the overseas accounts, though the Internal Revenue Service does require filers to report the portion of 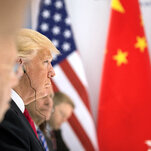