President Trump has brought home few American combat troops over all even as his pressure campaign against Iran risks a new Middle East conflict. …

When President Trump said on Twitter last week that all American troops in Afghanistan might be home by Christmas, he was reiterating a goal that has eluded him for years — and most likely hoping that when it comes to ending military deployments, voters will give him more credit for his messaging than for his results.

Mr. Trump has long vowed to leave Afghanistan and, more broadly, to conclude what he calls the United States’ “endless wars” across the Middle East, reviving a core theme from his 2016 campaign that some data suggest could have played a crucial role in his election.

But with three months left in his first term, Mr. Trump has not welcomed home the last American soldier from anywhere. While he has withdrawn thousands of troops from Afghanistan, Iraq and Syria, thousands more still risk their lives there — a source of clear frustration for a president hoping to impress voters with unequivocal, unprecedented results.

And though his defenders insist he deserves credit for avoiding any major new U.S. interventions, making him the first president in decades to do so, Mr. Trump has deployed thousands of additional soldiers to the Persian Gulf in response to growing tensions with Iran, which some analysts warn could spill into a hot war if he is re-elected. He has also done little to scale down major American military bases in places like Qatar and Bahrain.

“The missing piece here is that tens of thousands of forces are deployed all across the Middle East, supporting ongoing operations in the region and beyond,” said Dana Stroul, a fellow at the Washington Institute for Near East Policy. “The president has even increased the U.S. military presence in Saudi 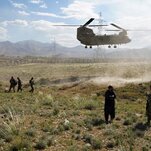