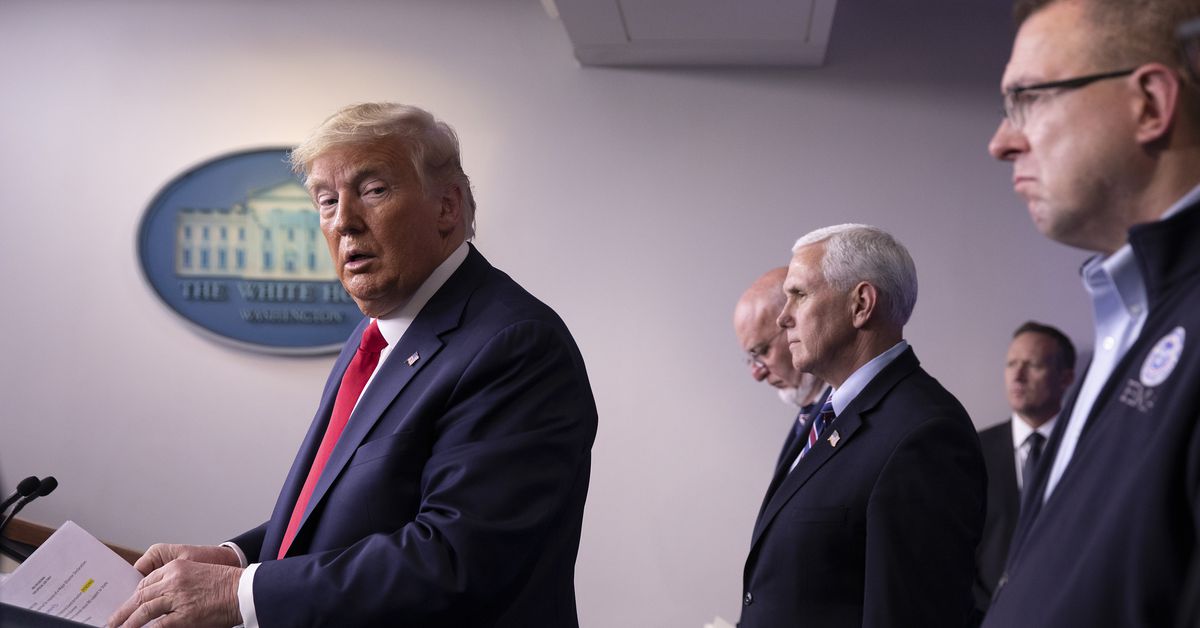 But as of Monday — five days later — even top Trump administration officials admit the government has yet to make a single order.

Health care workers across the country are desperate for masks, gowns, respirators, and other basic supplies they need to treat patients with Covid-19 and to keep themselves protected from the coronavirus. They’re pleading for him to use the DPA.

So what gives? Why hasn’t the Trump administration placed any orders yet?

Over the weekend, the president seemed to offer two reasons: 1) companies are already stepping up to make these products on their own; and 2) using this mechanism would be tantamount to socialism.

First, Trump argued medical device companies like Baxter and GE Healthcare, as well as automotive companies like General Motors and Ford, are working around the clock to meet equipment needs. Because of their efforts, there’s no reason for the government to intervene. “We have tremendous numbers of companies also making equipment,” Trump said during a Sunday press conference at the White House.

The problem is that both of these arguments are deeply flawed.

While it’s true that a lot of private businesses are upping their production, the lack of federal government involvement in the procurement and distribution process means that these products aren’t necessarily going to the cities and states in most dire need of them right now.

As Vox’s Jen Kirby writes, “State officials keep saying that without some sort of government guidance, they’re left competing for the same equipment (as opposed to having that equipment go where it’s most needed) and thus overpaying.”

Second, the DPA, when used as intended, doesn’t involve a government takeover of industry. “It doesn’t nationalize businesses, but rather allows the US government to contract with companies to prioritize manufacturing of critical goods — in this case, medical supplies,” Kirby notes.

“It’s a scalpel, not an ax,” James Hasik, a DPA expert at George Mason University, told me.

It’s unclear why Trump has convinced himself using the DPA is more dangerous than not using it. Some in the White House say he’s trying to lower the likelihood he could be directly blamed for any mismanagement. “If something goes wrong then it’s on the president,” a senior administration official told me, “and that’s something he doesn’t want to happen.”

But that’s what presidents are elected to do: to take responsibility for running the federal government. In the absence of that leadership, experts say, the supply shortage could get worse.

Why relying on business alone isn’t enough to address shortfalls

Many companies are already trying to rise to the occasion to make even more of the products patients will need.

As expected, some of those are top health care firms. “Our manufacturing teams are focused on making Baxter products that are in demand due to the pandemic and are needed by patients with chronic diseases,” Lauren Russ, a spokesperson for the Fortune 500 medical company Baxter International, which makes hospital care products, told me in an emailed statement.

Automotive manufacturers are also looking at ways they can use their considerable manufacturing capacity to contribute, including potentially retooling their factories to produce critical items such as ventilators.

But although Trump has been openly touting these automotive companies on Twitter, experts say it could take months for them to produce medical equipment at scale because they must train their workforces, get the right plans, and source the specific materials needed to make these new products.

Trump’s argument is that the government doesn’t need to tell these companies what to make, as they’re already making the needed products. That, in his mind, is reason enough not to put the DPA to use and allow states simply to order what they need from these companies.

But experts point to three major problems with this argument.

First, a private company is either going to sell to whoever placed their order first or to the highest bidder. It’s therefore possible that the places in America that most need masks, for example, may not get them in time because a mask-making company has other orders to fill first.

“Whoever picks up the phone first is next in line,” Brett Lambert, the Pentagon’s top manufacturing policy official from 2009 to 2013, told me.

If you’re New York Gov. Andrew Cuomo, that’s a problem. His state may now have to spend more on masks to outbid someone else, or simply not get them at all if the order comes in too late.

This is already starting to happen in some places. “We’re competing against each other, we’re competing against other countries, it’s a wild west, I would say, out there, and indeed, we’re overpaying for [personal protective equipment] because of that competition,” Illinois Gov. J.B. Pritzker told CNN’s Jake Tapper on Sunday.

This where the DPA comes in handy.

The federal government could get involved and place an order for masks, which would get fulfilled first because a DPA order takes priority over all others. Then, because the government knows which areas have the most need for those masks, it can distribute them appropriately. New York would certainly take priority over other parts of the country not reeling as badly from the coronavirus (possibly including Illinois).

The second flaw in Trump’s argument has to do with materials. Yes, many companies already involved in manufacturing medical supplies are ramping up their efforts. But in doing so, they’re going to need additional materials and may be hampered in their efforts if they can’t get those materials.

For example, a fabric company may typically sell most of its product to a dress-making company, but the cloth could be better used for masks right now. In that case, the federal government would pay the fabric company for the materials and then give them to a mask-making company so it can continue to make even more of them. “The government would have the authority to become the deliverer in chief,” Lambert told me.

Finally, there may be a company that wants to help build something — say, respirators — but doesn’t have the machinery or capital to do so. If the federal government thinks that company could be useful, it might give a loan or offer equipment under DPA so production can begin right away. That accelerates that company’s ability to help right now.

The issue, then, isn’t that companies are sitting on their hands. Problems arise in making the product and then delivering it to where it’s most needed in a time of crisis. Only the federal government coordinating the response has the insight and resources to help with that.

Steven Grundman, who served as the Pentagon’s deputy undersecretary for industrial affairs in the 1990s, told me that using the DPA won’t realize Trump’s Venezuela fears.

“The use of the DPA not only wouldn’t, it couldn’t, socialize the American economy,” he said. As noted above, DPA allows the government to identify, prioritize, and allocate scarce resources in a time of emergency. That’s a far cry from a complete government takeover of private business.

Indeed, the government isn’t seizing capital, labor, or equipment for itself and taking it without compensating private citizens and businesses that control them. It’s all about making sure those in trouble get what they need, and those providing the equipment still get paid for it.

Yet there are leading officials in Trump’s orbit, like trade adviser Peter Navarro, who believe the DPA is anathema to the free market. “We’re getting what we need without — without putting the heavy hand of government down,” Navarro said at the Sunday press conference.

If that’s the bet the administration is making, experts say it’s a bad one — and it could have disastrous consequences. “The DPA needs to be open for business,” Grundman said.