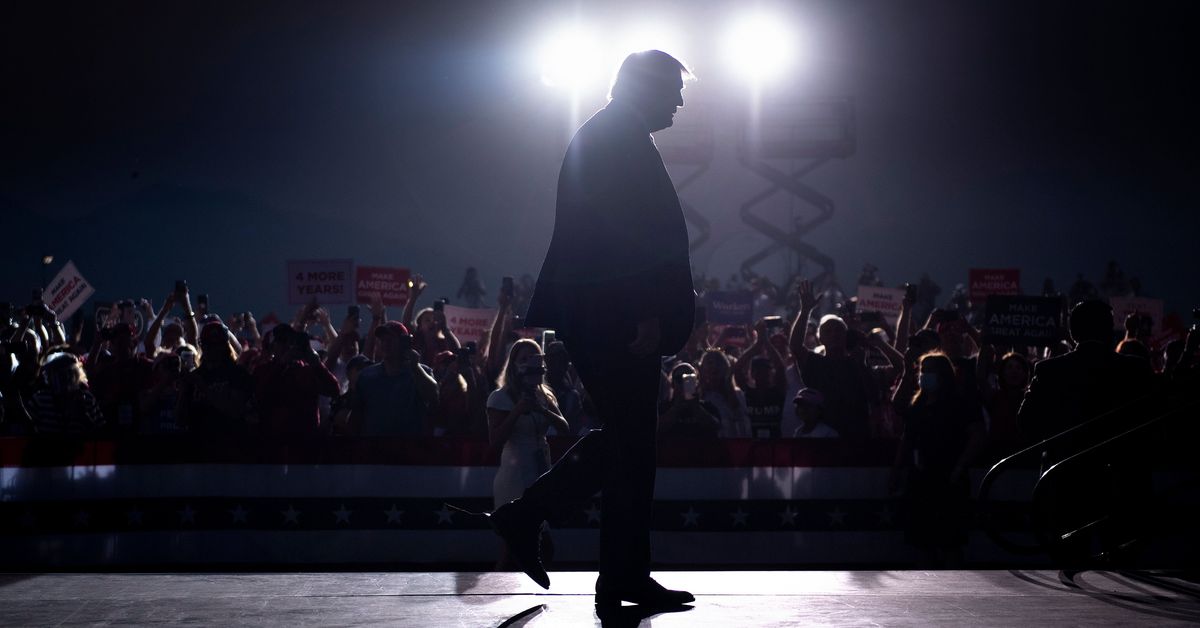 President Donald Trump traveled to Minden, Nevada — a town about 50 miles south of Reno — for a rambling, grievance-filled campaign rally on Saturday.

Over the course of a 90-minute speech, Trump attacked mail-in voting, Democratic presidential nominee Joe Biden, and Nevada Gov. Steve Sisolak, while lamenting his press coverage, long drives, and the fact he was not able to have Air Force One behind him as he spoke. He also once again suggested that he should be allowed to serve more than two terms in office, which would be unconstitutional.

Notably absent from his speech was anything approaching a cohesive second-term agenda or a policy platform. What little policy his speech did contain was delivered suggestively, in the context of what the president is against, including limiting fracking and teaching children “poisonous anti-American lies in school.” Far more of Trump’s remarks focused on attempts to demean his opponents and preemptively cast doubt on an election that national polls show him trailing in.

Trump has spent much of the summer searching for an attack that will stick to Biden — that he’s senile; that he’s a puppet of the radical left; and that he’ll usher in the apocalypse — and all three messages were on display in abundance Saturday.

Biden, Trump claimed Saturday, is “unable,” a “pathetic human being,” and suggested that his physical and mental condition are such that he “doesn’t know he’s alive.” The president worked to assert vice presidential nominee Sen. Kamala Harris is the actual driver of Biden’s policy, incorrectly calling her to the left of Sen. Bernie Sanders, and telling supporters that if Biden were to win, Harris would become president “in about a month.” Later in the speech, Trump also told supporters that a Biden victory would “permanently destroy the lives and dreams of tens of millions of Americans … and lead [to] countless deaths from suicide.”

It isn’t clear that these sorts of attacks have changed public opinion; recent polls indicate most Americans believe Biden is the stronger candidate on public safety, and a new Fox News poll released Sunday found more voters see Biden as “mentally sound” than the president.

It’s not a new talking point for Trump, who has already mounted a sustained campaign against mail-in voting and the US Postal Service — and who continues to claim there was widespread voter fraud in the 2016 election, when there was not.

But in an election where as many as six in 10 Americans say they plan to vote early and a historic number of ballots are likely to be cast by mail, such rhetoric takes on a dangerous new dimension. There’s a fair chance we won’t know who won on election night as ballots are counted — many states accept ballots postmarked on Election Day for days afterward — and Trump is already sending up a signal that he plans to dispute the results or even prematurely claim victory on Election Day if early returns show him ahead.

“The only way we’re tied is if they screw around with the ballots, which they will do in my opinion,” Trump said Saturday.

In anticipation of a candidate announcing they have won before ballots are all counted, Facebook and Twitter have announced new policies prohibiting candidates from “claiming victory before election results have been certified.”

Trump also suggested Saturday that his supporters should turn out as poll watchers, “because with you people watching the polls it’s going to be pretty hard to cheat. I’ll tell you, I wouldn’t want to be a cheater.”

“I hope you’re all going to be poll watchers, because with you people watching the polls it’s going to be pretty hard to cheat. I’ll tell you, I wouldn’t want to be a cheater” — Trump pic.twitter.com/zihzzgx6LI

The suggestion is a concerning one, however. There is a history of GOP poll watchers engaging in voter intimidation — one that led to a since-expired federal consent decree curbing such activity. With instances of armed Trump supporters engaging in pseudo-law enforcement vigilantism, there’s reason for concern that poll watching could lead to further voter intimidation in November.

In addition to his attacks on voting, Trump used his rally to hold forth on the merits of his coronavirus response.

In reality, more than 193,000 people have died from Covid-19 in the US, and the US response has been uniquely poor compared to other nations. On Friday alone — the first day in more than five months that Canada reported zero Covid-19 deaths — more than 1,000 Americans died.

As evidenced by Saturday’s unmasked and undistanced crowd, though, the Trump campaign has by and large decided to move on from the coronavirus, even as the US death toll continues to climb. A gathering the size of the president’s rally flies in the face of virtually every pandemic best practice under the sun, and, in fact, Trump’s event was shunted from the Reno airport to neighboring Minden after Reno officials refused to allow the rally to be held for public health reasons.

As Vox’s Aaron Rupar wrote after a similar Trump rally in North Carolina last week, the president’s insistence on holding rallies reflects an unwillingness to learn from past mistakes that borders on callousness:

The recent batch of Trump rallies were the first since June 20, when he held one at the BOK Center in Tulsa, Oklahoma, that ended up being a disaster. The Trump campaign’s decision to ignore warnings from public health experts likely fueled a spike in coronavirus cases in the area.

“In the past few days, we’ve seen almost 500 new cases, and we had several large events just over two weeks ago, so I guess we just connect the dots,” Tulsa City/County Health Department Director Dr. Bruce Dart said days after the rally, according to the Associated Press.

Herman Cain, a prominent Trump supporter who was photographed at the rally without a mask, contracted Covid-19 after the rally and died.

In short, between spinning a fictional narrative on the pandemic, eroding trust in voting, and his personal attacks on Biden, Trump spent a disparate amount of time Saturday constructing an alternate reality for himself and his supporters. It wasn’t a policy speech — it was barely even a reelection message — but it was pure, unfiltered Trump.