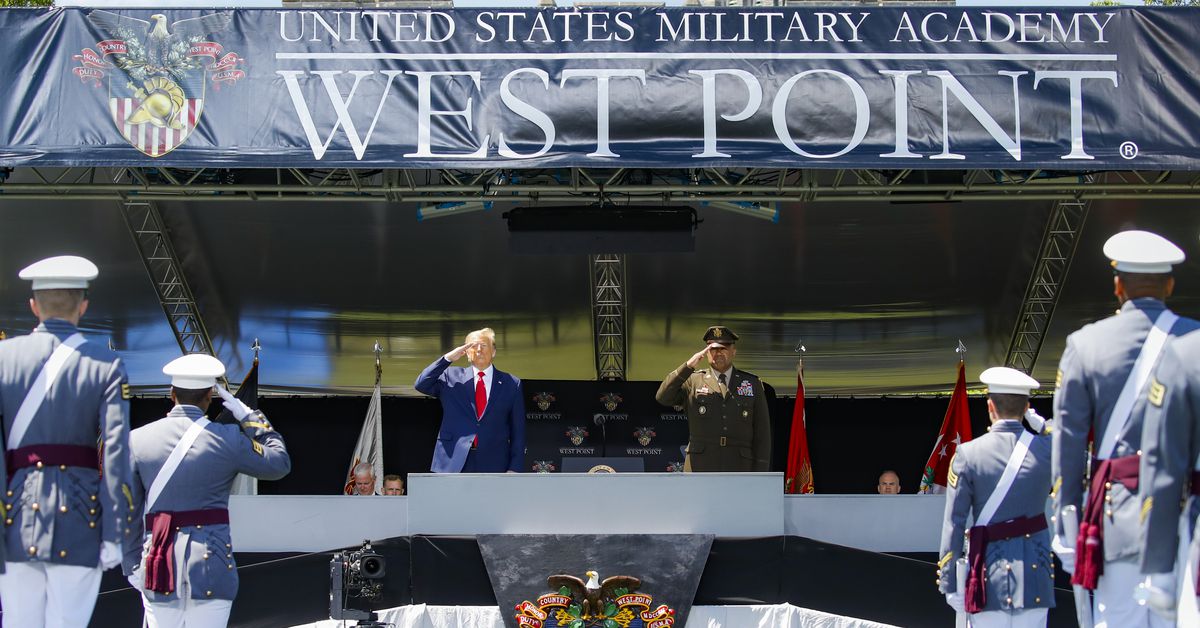 President Donald Trump gave a remarkably understated commencement speech at the West Point military academy on Saturday morning, declining to indulge in overt campaign rhetoric or mud-slinging at rivals as he spoke to a graduating class of uniformed cadets who wore face masks and sat in chairs spaced six feet apart.

But one part of his speech did stand out: his praise of the military as a source of apolitical stability over the course of American history.

“What has historically made America unique is the durability of its institutions against the passions and prejudices of the moment,” Trump said. “When times are turbulent, when the road is rough, what matters most is that which is permanent, timeless, enduring, and eternal.”

It was an extraordinary and — ironic — tribute to the independence of the military from politics, given that Trump has recently clashed with several current and former military officials over how he has used, and has threatened to use, the armed forces in quelling protests that arose in response to the police killing of George Floyd in May.

In fact, it would appear that top military brass pushing back against Trump’s own passions and prejudices have been a source of frustration for him of late, not something that his actions or speeches suggest he admires.

Trump’s West Point speech talked about apolitical love of country. It was ironic.

Trump’s speech on Saturday was a fairly subdued affair. He spoke with typically high praise for the unparalleled might of the US military, and boasted about its technological prowess.

Striking his usual tone of non-interventionist militarism, Trump said that Americans are “not the policemen of the world, but that “if our people are threatened, we will never ever hesitate to act.”

The stand-out part of the speech came when he spoke about how the military is an institution that transcends everyday politics — and enriches and stabilizes American society through that commitment:

The survival of America and the endurance of civilization itself depends on the men and women just like each of you. It depends on people who love their country with all their heart and energy and soul. It depends on citizens who build, sustain, nurture, and defend institutions like this one; that is how societies are made and how progress is advanced. What has historically made America unique is the durability of its institutions against the passions and prejudices of the moment. When times are turbulent, when the road is rough, what matters most is that which is permanent, timeless, enduring, and eternal.

This passage of the speech is remarkable because less than two weeks ago, Trump managed to elicit backlash from many of the highest figures in the military community for trying to undermine the very values he’s praising.

In a speech given in the White House Rose Garden on June 1, Trump declared himself “your president of law and order;” referred to riots as “domestic terror;” and called for the National Guard to “dominate the streets.” His threats to send troops into the streets to quiet protests was hugely controversial for the military because it would have forced troops to police — and potentially combat — American citizens in order to advance Trump’s political message.

That threat — essentially a signal of Trump’s willingness to use the Insurrection Act, which gives the president authority to send the US military into American cities and towns — came as law enforcement and military forces fired tear gas and rubber bullets at peaceful protesters gathered near the White House, in part in order to facilitate a photo opportunity at a nearby church.

For both the speech and the clearing of the crowd, Trump received a great deal of pushback.

Trump’s own defense secretary, Mark Esper, openly broke with him on the Insurrection Act. “I say this not only as secretary of defense, but also as a former soldier, and a former member of the National Guard: The option to use active-duty forces in a law enforcement role should only be used as a matter of last resort, and only in the most urgent and dire of situations,” he said after Trump’s speech. “We are not in one of those situations now. I do not support invoking the Insurrection Act.”

And Gen. Mark Milley, the chairman of the Joint Chiefs of Staff, later said publicly that it was a “mistake” that he appeared in Trump’s photo-op following the dispersal of protesters. Milley also said he regrets creating “a perception of the military involved in domestic politics.” (He reportedly contemplated resigning due to his concern over his own conduct.)

Multiple members of Washington, DC’s National Guard also spoke critically to the press of the decision to send them in to suppress peaceful protesters. “One soldier said he and some fellow troops were so ashamed in taking part against the protests that they have kept it from family members,” the New York Times reported.

These officials and members of the Guard weren’t alone. Top military leaders issued statements of sympathy for the protesters. Retired Adm. Mike Mullen, a former chairman of the Joint Chiefs of Staff under presidents George W. Bush and Barack Obama, criticized Trump’s threats, and wrote in the Atlantic that “our fellow citizens are not the enemy, and must never become so” in an essay that broke from the usually measured tone adopted by former military personnel. Retired Gen. James Mattis, Trump’s former secretary of defense, blasted Trump for creating “a false conflict between the military and civilian society.” Retired Gen. John Allen deemed the speech “the beginning of the end of the American experiment.”

Trump appears to have backed off of threats to use the Insurrection Act for now, but it’s just the latest example of how he chafes at limitations to his ability to control independent parts of the state bureaucracy. Much of his presidency has been defined by an agenda to undermine independence in federal government by doing things like firing civil servants he perceives as obstacles to his political goals and attempting to shape the Justice Department into a political arm of his administration.

His speech Saturday would suggest he has had a change of heart. His actions, however, suggest otherwise.