According to federal officials, an independent panel of medical experts said the encouraging results announced on Monday might have relied on outdated information. …

Federal officials, however, were stunned to discover on Monday that AstraZeneca had released those results even though the monitoring board had spent days pushing for — and eventually received — updated data. By then, Dr. Fauci had publicly hailed the results at a White House briefing, and the company had been showered with positive media coverage. AstraZeneca’s shares rose about 4 percent on Monday.

AstraZeneca on Tuesday defended its actions, saying the interim results appeared to be “consistent” with more recent data collected during the trial. The company said it would immediately share its latest data with the monitoring board and reissue fuller results within 48 hours.

Dr. H. Cody Meissner, an infectious-disease expert at Tufts University School of Medicine, said he had never before seen such a sequence of events with a vaccine developer. “You know the anti-vaccine community is going to use this as fodder to argue that pharmaceutical companies are always deceptive,” he said.

Dr. Meissner, who serves on a board that advises the F.D.A. on whether to approve vaccines, predicted that if AstraZeneca sought such authorization, board members would be even more careful than usual to scrutinize its hundreds of pages of data.

Dr. Eric Topol, a clinical trials expert at Scripps Research in San Diego, said it was “highly irregular” to see such a public display of friction between a monitoring board and a pharmaceutical company.

“I’ve never seen anything like this,” he said. “It’s so, so troubling.”

AstraZeneca’s relationship with the U.S. authorities has been fraught almost since it began its clinical trial here last summer. Senior health officials complained that the company 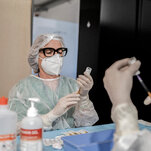