Vaccine News Gives Hope for Spring, if Enough People Get the Shots

New data from several vaccine trials offer positive signs, but many public health experts say emerging variants mean the next few months will be a race against the virus. …

As coronavirus infections surged around the country in early November — and as the prospect of a long, dark winter loomed — it was not clear if any of the vaccines in development would pan out.

Now, three months later, the picture is very different. Two highly effective Covid vaccines are rolling out around the country. Three others appear to be slightly less robust, but still offer strong, and in some cases complete, protection against severe disease and death.

In the past week alone, Novavax and Johnson & Johnson reported that their vaccines offered good protection, including against new, more contagious variants of the coronavirus. And a new analysis from the University of Oxford suggests its vaccine, developed with AstraZeneca, has the potential to slow transmission and works especially well when second doses are delayed.

After a sputtering launch, vaccination in the United States is speeding up: More than 27 million Americans have received a first dose, and more than six million have been fully vaccinated. That pace has accelerated enough that President Biden, facing criticism that his administration’s goal of giving out 100 million shots in his first 100 days in office was too modest, last week revised the target upward to 150 million shots.

“We’ve come a long way,” said Akiko Iwasaki, an immunologist at Yale University. “We’re still living with deadly disease because we haven’t vaccinated enough people, but once we do, it’s going to really change the way we live and deal with this virus.”

But even as there are reasons for hope in the spring and summer, many public 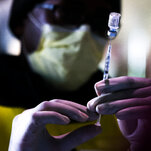