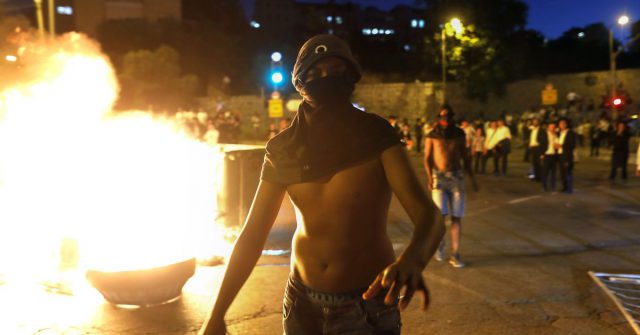 Israel is currently being consumed by violent protests over the killing of an unarmed Ethiopian Israeli teen, leading to turned-over cars, burning tires, and even a few injuries.

An off-duty police officer killed 19-year-old Solomon Tekah on Sunday after the bullet he shot at the ground bounced up and mortally wounded the teenager. While the cop may be charged with negligent homicide, it’s clearly not enough for the aggrieved Ethiopian community of the Jewish state.

Thousands of protesters took to the streets to express their anger. Demonstrators shut down 12 major junctions across the country, including in the large city of Tel Aviv, leading to huge traffic jams. “End the killing, end the racism,” some chanted. The protests have grown so big that in some areas, police closed down important highways.

While many demonstrations were peaceful, some took a violent turn, causing four police officers to sustain injuries.

Some scenes captured by Jerusalem Post reporter Anna Ahronheim show rioters destroying what appear to be police cars. In one instance, many people helped flip a car over into a fire on the street.

About 19 people have been arrested in connection with the rioting so far.

Tekah’s father, Workah Tekah, supports the protesters but has called for them to avoid violence. Still, he says he wants what happened to his son to never happen again.

“We respect the laws and customs. Why are we not respected? We have to live together. Enough! Let us be at peace. I want to be the last parent to bury their child,” he said during a eulogy for his son on Tuesday.

Israeli Prime Minister Benjamin Netanyahu offered his first remarks on the protests late on Tuesday. “We’re all mourning the tragic death of the youth Solomon Tekah. But I ask of you one thing: Stop the roadblocks. We are a country of the law, we will not tolerate roadblocks.”

Yet Tuesday’s flare-up is the latest one between Israeli authorities and an Ethiopian community there that has felt persecuted for years. Tekah’s death has only underscored that sentiment.

Those protests grew extremely contentious, with Israeli police firing tear gas while demonstrators fought back with bottles and bricks. More than 50 officers and seven rioters were injured.

There’s clearly a feeling among the Ethiopian Israeli community that they are second-class citizens in the country. Community leaders told the New York Times in 2015 that they are constantly discriminated against when it comes to housing, education, and employment.

It’s a stark turn from 1991, when Israel airlifted 14,500 Ethiopian Jews from Ethiopia within 36 hours so they could live in the tiny Middle Eastern country and escape the war that was roiling the African country at the time. That plan, ironically, was named Operation Solomon — the same name as the teenager who was killed Sunday.

The Ethiopians are not alone: Many African migrants and refugees living in Israel feel consistently persecuted, surely leading to a mounting sense of anger against the state. That said, Ethiopian Jews aren’t asylum seekers. They’re Jews who by right, according to Israel, should be treated the same as any other Jews in the country — though Israeli leadership has rarely lived up to that.

It’s unclear where, exactly, Ethiopian Jews came from. But their origin story legend says they are descendants of King Solomon, who built the First Temple.

So the protests are directly about Tekah’s death, but on a grander scale, they are about something much bigger: the Ethiopian community’s sense of dignity in Israel.

“We are not prepared to wait any longer to be recognized as equal citizens. It may take a few months, but it will happen,” a protester told the BBC in 2015. Sadly, it’s taken a lot longer than that.