The states join dozens of others, heeding a call from the president, to rapidly expand eligibility. …

Maine announced on Thursday that adults 16 years and older will be eligible for a vaccine on Wednesday, more than a week sooner than the April 19 deadline the state previously set. Virginia also announced it would allow residents 16 or older to begin getting vaccinated against Covid-19 on April 19, joining more than 40 states that have sped up efforts to open the process to all adults as federal health officials warn about a possible fourth surge of the coronavirus.

“The Covid-19 vaccine is the light at the end of the tunnel,” Gov. Ralph Northam said in a statement. “And that light is getting brighter every day, as more and more Virginians get vaccinated.”

Inoculation efforts in the United States have sped up, as states push to make more adults eligible, heeding a call from the president to rapidly expand eligibility.

Across the country, an average of 2.9 million shots a day were being administered, as of Thursday, according to data reported by the Centers for Disease Control and Prevention. About 32 percent of Virginia’s total population has gotten at least one shot, putting it in the top 20 states, according to a New York Times analysis of C.D.C. data. About 17 percent of Virginia’s total population is fully vaccinated. 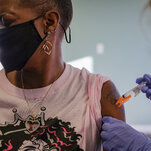