The warring sides have reached a temporary truce, brokered by Moscow, allowing for an exchange of prisoners and collecting the dead, Russia’s foreign minister said. …

MOSCOW — Azerbaijan and Armenia negotiated a limited cease-fire early Saturday after almost two weeks of fierce fighting over a disputed province, with the goal of pausing combat long enough to collect bodies from the battlefield and to exchange prisoners.

The Russian-brokered agreement, which takes effect at noon on Saturday, was short on specifics. The issue of the how the cease-fire would play out on the front lines was left to the sides to agree to in “additional” talks.

The four-point agreement said the warring parties would halt hostilities on “humanitarian” grounds for the prisoner exchange and to retrieve bodies under criteria established by the Red Cross. It was not clear if the Red Cross would oversee the process.

Under the terms of the deal, Azerbaijan and Armenia committed again to negotiate for a lasting peace in the Minsk Process, a long-drawn-out diplomatic effort at a settlement that hasn’t prevented earlier escalations in fighting.

said in a televised speech Friday that he was happy to have talks but was making no concessions.

The conflict in and around Nagorno-Karabakh, an ethnic Armenian enclave in Azerbaijan, flared late last month and has threatened to spiral into a wider war drawing in Russia; Turkey, a NATO member; and possibly Iran.

“Ours is a tiny country, hardly visible on the map, but it could be the start 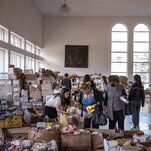