What Is ‘The Firm’? The Royal Family Institution, Explained

For all the familial drama, Harry and Meghan’s story is also about workplace conflict — what happens when a glamorous outsider joins a hidebound family business, one now in crisis mode. …

When Prince Harry’s wife, Meghan, referred to the British royal family as “the Firm” in their dramatic interview with Oprah Winfrey on Sunday, she evoked an institution that is as much a business as a fantasy. It is now a business in crisis, after the couple leveled charges of racism and cruelty against members of the family.

Buckingham Palace responded on Tuesday that “the whole family is saddened to learn the full extent of how challenging the last few years have been for Harry and Meghan.” The allegations of racism, the palace statement said, were “concerning,” and “while some recollections may vary, they are taken very seriously and will be addressed by the family privately.”

Harry and Meghan’s story, of course, is a traumatic personal drama — of fathers and sons, brothers and wives, falling out over slights, real or imagined. But it is also a workplace story — the struggles of a glamorous, independent outsider joining an established, hidebound and sometimes baffling family firm.

The term is often linked to Queen Elizabeth’s husband, Prince Philip, who popularized its use. But it dates further back, to the queen’s father, King George VI, who was once reported to have declared, “We’re not a family. We’re a firm.”

It is an enterprise that reaches well beyond the royals themselves, encompassing an army of private secretaries, communications advisers, ladies in waiting, heads of households, chauffeurs, footmen, domestic servants, gardeners and all the other people who run the palaces, and the lives, of the royals who live in them.

Buckingham Palace alone has more than 400 employees, who operate everything from a vast catering business for the dozens of banquets, garden parties and state dinners hosted 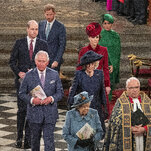