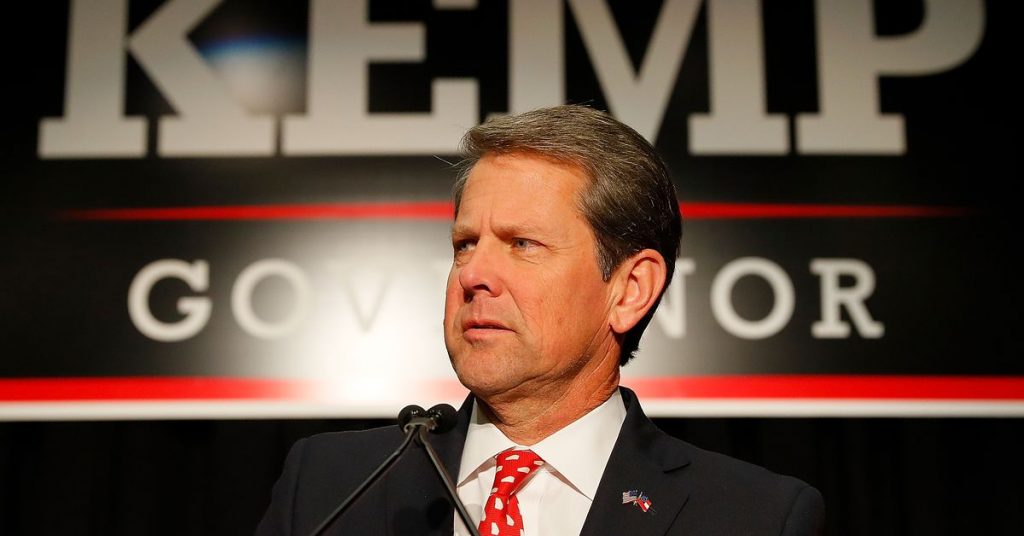 Kemp, the governor who tied himself tightly with the president in order to narrowly defeat Stacey Abrams last year, is appointing Atlanta businesswoman Kelly Loeffler to the Senate seat being vacated by Sen. Johnny Isakson. Trump, meanwhile, has pushed a close ally, House Judiciary Republican Doug Collins, for the role.

On the one hand, this fight might not have major consequences for the Senate’s agenda: Most upper-chamber Republicans are overwhelmingly loyal to the president, and the party is remarkably unified on some of the most important issues of the day, like impeachment. And yet, Kemp’s decision has been a contentious one.

Several experts say it’s an incredibly strategic move: Georgia Republicans are desperately struggling to expand their base and connect with suburban women, a demographic Loeffler’s appointment could help reach.

Trump, meanwhile, has long pressed Collins for the job given the House Republican’s avid defense of the president throughout impeachment proceedings. As the logic goes, even though Collins would be a very junior senator if elected to the upper chamber, he’d continue to be a vocal supporter — keeping up press appearances and churning out defenses — as lawmakers participate in an impeachment trial. Additionally, if Collins were to leave his role as the top Republican on the House Judiciary Committee, there are plenty of other Trump defenders, like Rep. Jim Jordan (R-OH), who could take over the high-profile job.

Additionally, critics like the Democratic Senatorial Campaign Committee suggest that Loeffler — who is a multimillionaire — is leveraging her wealth to “buy a Senate seat.” And conservatives who are closely aligned with Trump see some of her past donations, including those in favor of Sen. Mitt Romney, as cause for concern.

Kemp’s decision ultimately sends a message that extends beyond the impeachment inquiry. His plans to stick with Loeffler in the face of Trump’s opposition underscores the president’s weakness with suburban women voters, a sign that this demographic could continue to pose major problems for him in 2020.

The disagreement over the Georgia Senate pick, explained

The crux of the disagreement about the pick is a straightforward one: Kemp is interested in a candidate who will grow Georgia Republicans’ (and his own) electoral base while Trump is looking to elevate a dedicated loyalist.

Both candidates are staunch Republicans:

And though Loeffler has been criticized for potentially being more moderate, Kemp has said that the final pick will support Republican priorities.

Given Isakson’s retirement announcement earlier this year, whoever is selected to replace him will be up for a special election in 2020 to determine if they’ll serve out the remainder of his term. That same person would need to campaign for reelection again in 2022.

Loeffler’s appointment is seen as addressing an existential problem Republicans are facing in the increasingly purple state, a trend that was evident in the 2018 gubernatorial race: Democrats have a strong hold on voters of color and younger voters, meaning Republicans need to keep and grow their share with moderate white women in order to maintain their electoral strength. These exact voters, however, were among the groups who did not back Kemp in his governor’s race, which he won by fending off a run-off with 15,000 votes.

“The governors’ support in 2018 was very much rural-based and he got clobbered in metro Atlanta and the other urban centers,” University of Georgia political science professor Charles Bullock tells Vox. “A component that moved against Republicans were suburbanites, and particularly white women suburbanites.”

“[Kemp] wants to see the Republican Party in Georgia maintain its margins, and all indications are that those margins are dissipating, primarily due to the loss of suburban white women,” says University of Georgia political science professor Audrey Haynes.

Loeffler’s appointment, it seems, is intended to engage more members of this group in a state where elected Republican officials are predominately white and male. If appointed, she’d break up the state’s mostly male Congressional delegation, a dynamic that’s reflected among Republicans in the state legislature as well.

Trump and his advocates, including Rep. Matt Gaetz, have argued in favor of Collins because they think he would be another solid ally for the president if impeachment were to move to the Senate. This is not to say that Loeffler wouldn’t do the same, but that Collins is more of a known entity, one who would take it upon himself to rally voters to support the president.

“Doug Collins is very aggressive in getting out in front of the national and local media and won’t be shy about campaigning as part of the Trump team,” says Republican communications strategist Susan Meyers.

The ninth Congressional district Collins represents in northeastern Georgia is rated as one of the most conservative in the state by Cook Political Report — and it’s also one that’s bolstered Trump in the past.

“We know that the president values loyalty more than anything else — his choice, Rep. Doug Collins, represents a district in northern [Georgia] that gave Trump nearly 80 percent in 2016, and he votes accordingly,” says John Miles Coleman of Sabato’s Crystal Ball.

Loeffler’s potential strengths with moderate women voters, in turn, highlight Collins’s and Trump’s own weaknesses with them. “The president is not popular with that electorate, whether that’s in Georgia or somewhere else,” says Bullock, an indication that Trump could struggle with this group again next year.

Kemp’s decision isn’t expected to hurt him too much, despite the attacks from Trump supporters

Trump’s supporters, including Gaetz, have attacked Kemp over his proposed Senate pick, though experts argue that it might not hurt the governor in the long term. While Gaetz threatened Kemp with a Republican primary challenger in a tweet, the amount of time that will pass before the governor is up again could help diffuse some of this vitriol. Additionally, Kemp has garnered a strong approval rating during his time in office, presently surpassing Trump in popularity.

“In 2018, Kemp outperformed Trump in almost all the counties in Georgia, and his popularity was at about 55 percent approval in one of the latest polls conducted in the state. Far better than the president’s numbers,” says Haynes. Trump’s endorsement did give Kemp a boost in 2018, but LaGrange College political science professor John Tures says the governor was already in a strong position even before he received it.

Additionally, Kemp has the backing of other top leaders in the Republican Party including Senate Majority Leader Mitch McConnell, a sign that his choice isn’t as controversial as some of the back-and-forth has suggested — even possibly with the president himself.

“The NRSC, Senator McConnell, and Senator Isakson are all supportive of the pick. The same with Senator Perdue. My guess is this wouldn’t have happened had the president been adamant that Kemp choose Collins,” Republican strategist Jay Williams tells Vox.

Although he was not chosen for the job, there’s still a possibility that Collins runs for the seat next year or in 2022. Because the state has what’s known as a top-two “jungle primary” for the Senate, the final two candidates can sometimes be from the same party.

At this point, Collins has yet to completely eliminate this option. “Let’s see what the governor does first. I think he’s heard from a lot of folks. But if he does, then that’ll be a decision we have to make at that point,” he said during an appearance on Fox News Sunday.