Why the Rape Claim Against Australia’s Attorney General Seems Familiar

Some see unsettling parallels with another powerful man halfway across the world. …

The Australia Letter is a weekly newsletter from our Australia bureau. Sign up to get it by email.

He was accused of sexual assault decades after it allegedly occurred, in a way that makes police investigation all but impossible. Backed by his party and the most powerful man in the country, he maintained his innocence and held one of the most important legal positions in the country, even as questions continued to swirl around him.

Which man are you thinking of: Australia’s attorney general, Christian Porter, or the United States Supreme Court justice Brett Kavanaugh?

Of course, there are key differences too: Kavanaugh was a new appointee, while Porter is a longstanding member of the government. And Christine Blasey Ford, Kavanaugh’s accuser, was able to publicly testify, which is impossible for Porter’s accuser, who died by suicide last year.

Still, the similarities between the two cases have unsettled many Australian women, intensifying concerns that Australia’s government is continuing to follow the playbook of the (now departed) Trump administration on a variety of issues.

The Kavanaugh comparison was the first thing that came to mind for Sharna Bremner, founder of the advocacy organization End Rape on Campus Australia, when she learned about the allegation against Porter. For her, the American case offers a grim foreshadowing of how the case could play out in Australia.

“I think what we’re about to see again is that powerful men can get away with anything,” she said.

As with Kavanaugh’s eventual appointment to the Supreme Court, she said, “the message that’s being sent now is: 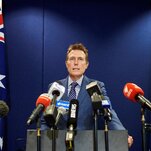