Voters go to the polls on Saturday after a campaign that focused heavily on Ms. Ardern’s successful handling of the coronavirus outbreak. …

Here’s what you need to know

SYDNEY, Australia — New Zealand’s prime minister, Jacinda Ardern, is popular around the world, generating gushing reviews and inspiring a progressive fan base. She has been praised for managing the pandemic, the Christchurch terrorist attack and the birth of her first child.

She is expected to return to power in this week’s general election, with polls giving her Labour Party a comfortable double-digit lead over the more conservative National Party. An especially strong showing might even give Labour the country’s first majority government since an electoral overhaul in the mid-1990s that empowered minor parties and favored coalitions.

But New Zealand’s proportional voting system could also lead to some surprises, and Ms. Ardern has been vague about her plans for a potential second term.

Here’s how the campaign has played out, and what to watch for as the results come in on Saturday.

What issues are shaping the race?

Support for Ms. Ardern has been surging for months, mainly because of her successful management of the coronavirus pandemic.

She led a comprehensive campaign for elimination of the virus centered on a “go hard, go early” approach, with borders locked down beginning in March, expanded testing and contact tracing, and a four-level alert system that made clear what was expected of everyone.

She also connected directly with her constituents, often <a class="css-1g7m0tk" href="https://www.nytimes.com/2020/05/23/world/asia/jacinda-ardern-coronavirus-new-zealand.html" 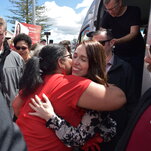