We’re covering challenges for Israel’s new government and a rare interview with a top Chinese virologist.

gave a first glimpse of its priorities on Monday, as ministers announced plans to repair ties with U.S. Democrats, investigate a disaster at a religious site that killed 45 and permit a far-right march through Jerusalem.

Separately, Benny Gantz, the defense minister, issued a formal call for a commission of inquiry into a stampede at the holy Jewish site on Mt. Meron that killed 45 worshipers last month. Netanyahu’s government, in contrast, did not call for an investigation for fear of angering ultra-Orthodox politicians.

But allowing a far-right Jewish march through Palestinian neighborhoods in East Jerusalem stuck to a decision made in the final days of the Netanyahu administration. Hamas vowed to respond.

China’s rising military ambitions present challenges that must be addressed, NATO said on Monday, the first time it has portrayed the country’s armed forces in such a potentially confrontational way.

While the communiqué described Russia as a “threat” to NATO, using tough language that was not necessarily a surprise, it was the description of China that attracted unusual attention.

China is not directly called a threat, but NATO states that “China’s growing influence and international policies can present challenges that we need to address together as an alliance.” The leaders cited Beijing’s expanding nuclear arsenal 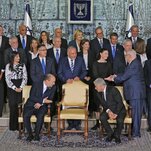