Starting the new rules on a holiday helped, with some predicting more confusion and backups in the days ahead. …

LONDON — At the ports and terminals on Britain’s southeastern coast, a new era began on Friday morning without much fuss. Ferries and trains that carry goods to France from Dover and Folkestone were running on time, and drivers snaked their trucks into the port unencumbered by congestion.

To all appearances, little may have changed on Jan. 1, the country’s first day outside the European Union’s single market and customs union. It was, after all, a public holiday and not much business was taking place.

But for the first time in over 25 years, goods traveling between Britain and the European Union will no longer move freely and customs checks will be enforced for goods entering the bloc.

A trade deal, signed into law in Britain in the early hours of Thursday, less than 24 hours before it took effect, means the country and the European Union will trade goods without tariffs. Businesses, however, will still face significant changes that they had been urged to prepare for even during the lockdowns, closures and other social restrictions that the government has introduced to contain a surging coronavirus pandemic.

£670 billion of imports and exports, and Britain imports far more goods from the bloc than it exports. (It has a trade surplus in services, which aren’t covered by the trade deal.)

Britain has at least 150,000 exporters who have 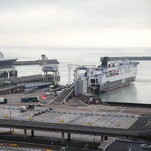