The move came after Britain refused to withdraw legislation that it admits could break international law by potentially overriding commitments on Northern Ireland. …

LONDON — A decision by the European Commission on Thursday to press ahead with legal action against Britain over its plans to override parts of an agreement on withdrawal from the bloc raises the stakes at a critical moment in talks that will determine whether the two sides can avert an economically ruinous rupture.

The commission’s decision was not a surprise. It gave Britain an ultimatum last month, threatening to take it to court unless it dropped its plans to backtrack on a deal Prime Minister Boris Johnson struck last year.

But the decision roiled the waters on the eve of a crucial meeting between the two sides scheduled for Friday at which they were supposed to decide whether to intensify negotiations over a trade deal that needs to be largely in place by a mid-October deadline set by Mr. Johnson.

Little European Union business gets done until the last minute, however, and analysts said that timetable was likely to slip. Nonetheless, negotiators are running up against a harder deadline in early November, the minimum time needed for ratification of any agreement by the European and British Parliaments by the end of the year.

“This cannot be good news,” said David Henig, director of the U.K. Trade Policy Project at the European Center for International Political Economy, a research institute, who added that the decision over legal action illustrated the tensions between the two sides. “There is an awful lot to be done in two to four weeks to get a trade deal done.”

Britain formally quit the European Union on Jan. 31 but is subject to its economic rules until the end of this year. Even with a 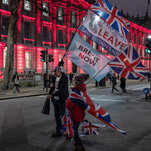