Covid Vaccine Rollouts in Europe Are Off to a Shaky Start

Programs in many countries have been hampered by slow-moving bureaucracies, a lack of nurses and shortages of vital equipment. …

With a more contagious variant of the coronavirus forcing England to impose a strict new national lockdown and European nations extending restrictions in the face of rising cases, political leaders have promised that mass vaccinations will bring an end to the suffering.

But in the race to beat the virus, the virus is still way out in front.

There are shortages of needles in Italy, Greece and other countries. Spain has not trained enough nurses. France has only managed to vaccinate around 7,000 people. Poland’s program was rocked by scandal after it was revealed that celebrities were given preferential treatment. There are calls in Germany to take control over vaccine purchases from European Union authorities. Nearly every country in Europe has complained about burdensome paperwork.

And then there is the Netherlands, which did not even begin its campaign until Wednesday.

Around the world, inoculation efforts are rolling out slower than promised, even as new cases soar and record numbers of virus patients flood hospitals, placing a double burden on health care providers tasked with leading vaccination drives.

In Europe, where most countries have been under varying degrees of lockdown for months, frustration is building as restrictions have been stepped up or extended while national vaccination efforts are stymied by various problems.

The threat posed by the fast-spreading variant is adding extra urgency to an already daunting challenge. And even in places where the rollout has been relatively smooth, it is not nearly fast enough to get ahead of the virus.

Prime Minister Boris Johnson said England would be locked down until inoculations reached the four most vulnerable groups: nursing home residents and those who care 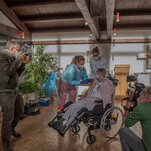