We needed to marry for our relationship to survive. But “le confinement” was too much. …

I liked that our May-September romance was unconventional. Bucking the norms I had hewed to out of a sense of duty felt as validating as it did challenging.

My husband had to confront the alienation of his Tunisian family, who refused to acknowledge my existence, even after our wedding. Yes, we had fallen deeply in love, but choosing to marry was also an act of rebellion for each of us, a rejection of what society and friends and family expected. It felt like setting out into uncharted territory. It was exhilarating.

But marriage was also a necessity for our relationship’s survival. When I moved to Paris with my sons, my lover’s Tunisian passport made it nearly impossible for him to spend time with me here. We fixed our problem by flying to California and tying the knot.

Alas, thrill-seeking and passion can only take a marriage so far and, now that we were living as a family, reality had set in. Gone was the Middle Eastern backdrop, the inexpensive four-bedroom house with the verdant garden. The City of Lights is as romantic as ever, but Paris, for me, represented a return to the responsibilities of adult life with its endless loads of laundry and the drudgery of putting dinner on the table every night.

Since my husband’s arrival, I had been bumping up against the uncomfortable understanding that the way I wanted to live as a woman in my 50s was starkly different from how he thought life in his late 20s should look. My middle-aged friends bored him. My insistence on living in a clean and orderly house was, to him, senseless. And the hours he lost to Facebook, to watching European football, seemed pointless to me. 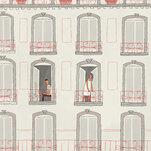