Ahead of a far-right rally in Portland, Trump tweets a warning to antifa 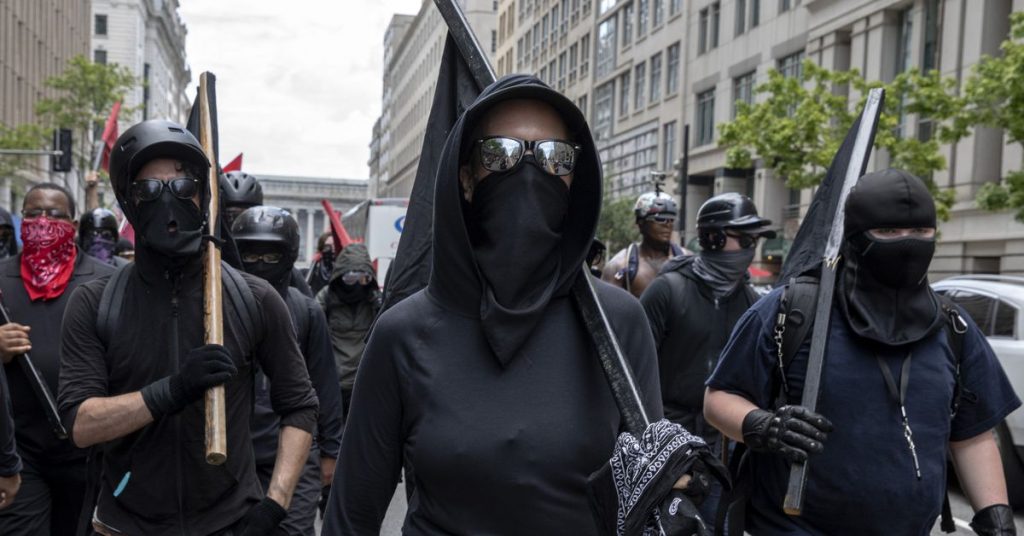 President Trump issued a stark warning to antifa, the collective of militant anti-fascist leftist groups, ahead of a rally on Saturday in Portland, Oregon, where antifa activists were widely expected to confront far right activists.

“Major consideration is being given to naming ANTIFA an ‘ORGANIZATION OF TERROR,’” Trump tweeted. “Portland is being watched very closely. Hopefully the Mayor will be able to properly do his job!”

Notably, the president did not warn or criticize the controversial right-wing group organizing the rally that antifa was planning to protest against. Organizers Joe Biggs and Enrique Tarrio, who did not receive a permit for the rally, are members of the Proud Boys, a group of self-proclaimed “Western chauvinists” with links to the white supremacist rally in Charlottesville in 2017 and a history of violence against left-wing activists. The Southern Poverty Law Center has designated them as a hate group.

Portland Mayor Ted Wheeler told The Oregonian he believed members of the alt-right like Biggs and Tarrio come to Portland hoping to foment violence, well aware that it is home to a large antifa contingent, Rose City Antifa. “I think they come to Portland because it gives them a platform,” Wheeler said. “They know that if they come here conflict is almost guaranteed.”

Of Trump’s tweet, Wheeler said, “Frankly, it is not helpful.”

Trump’s disinterest in criticizing the Proud Boys is part of a longer trend in which he’s remained completely silent or, at most, has been mildly critical of the threat posed by white nationalist and white supremacist organizations, many of whom view his presidency as a boon for their cause and whose language echoes that of the president.

Trump often undercuts his criticism of hate with statements that run counter to the point he seems to be making, and with political talking points. As Vox’s Aaron Rupar writes, following a mass shooting that killed 11 people at a Pittsburgh synagogue, “Trump responded by reading a speech in which he denounced the ‘evil anti-Semitic attack.’ But during unscripted comments later that same day, he lamented that there wasn’t an armed guard inside the synagogue.”

And following the recent shooting in El Paso — in which the shooter left writings that made it clear he hoped to target members of the Latinx community — Trump said “one voice, our nation must condemn racism, bigotry, and white supremacy,” but also blamed mental illness and video games for the violence.

The president also, infamously, responded to the death of Heather Heyer amid the violence in Charlottesville by saying there were “very fine people on both sides” of a protest that included neo-Nazis and members of the Ku Klux Klan.

Trump has been repeatedly critical of antifa, however, and has threatened to label the association a terrorist organization in the past. GOP lawmakers have already made symbolic gestures to the same effect: In July, Republican Sens. Ted Cruz (TX) and Bill Cassidy (LA) introduced a nonbinding resolution that would label antifa activists as terrorists.

“Antifa are terrorists, violent masked bullies who ‘fight fascism’ with actual fascism, protected by Liberal privilege,” Cassidy said in a statement. “Bullies get their way until someone says no. Elected officials must have courage, not cowardice, to prevent terror.”

Part of what would make Cassidy and Cruz’s effort difficult (beyond the fact that antifa has not yet committed any terror acts) is that antifa is not a centrally organized organization. Its members mostly participate in actions anonymously, making it difficult to pin down a clearly stated ideology or code of ethics toward violence.

“The group of typically black-clad activists are radicals who believe the best way to deal with the rise of white supremacy and hate groups in the Trump era is by confronting them on the street,” Vox’s Zack Beauchamp has explained. “Sometimes, this means organizing demonstrations against them; other times, it means brawling in the streets.”

Portland has seen a striking number of brawls between antifa and far-right groups in recent years. The Proud Boys themselves have a known record of violence against their political adversaries. Two members of Proud Boys are currently on trial in New York, and are charged with, among other things, attempted gang assault.

In anticipation of a stand off between antifa and the members of the alt-right who gathered in the city Saturday, Mayor Wheeler and Portland Police Chief Danielle Outlaw ordered that no police officers would have the day off, and more than two dozen other agencies, including the FBI, were involved in preparation. Fortunately, the protests remained largely peaceful; and the bulk of the alt-right demonstrators were escorted out of the area police had cordoned off for them following a brief event.

Both antifa and alt-right representatives called the event a success; Trump, however, did not tweet what he took away from his close watch of the situation.

Prev post Trump’s obsession with crowd sizes, explained
Next post Trump advisers are scrambling to sell the idea that a recession isn’t going to happen