The dissident, Roman Protasevich, co-founded a Telegram channel that is a popular opposition outlet in Belarus. The plane was flying from Athens to Lithuania when it was forced down. …

In Russia — where the state media described last year’s uprising against Mr. Lukashenko as a Western plot — the arrest met with approval among Mr. Putin’s supporters. Margarita Simonyan, editor of the pro-Kremlin RT television network, wrote on Twitter that Mr. Lukashenko “played it beautifully.” And Vyacheslav Lysakov, a member of Parliament allied with Mr. Putin, described Mr. Protasevich’s arrest as a “brilliant special operation.”

The Belarusian authorities said they had ordered the plane to land after receiving information about a bomb threat, though Vilnius, the plane’s destination, was much closer than Minsk when the jetliner turned around, flight-tracking data showed. The country’s Defense Ministry said in another statement that the country’s air defense forces were put on high alert.

Mr. Lukashenko and his government are known to use ruses to pursue their political opponents.

Mr. Protasevich’s arrest comes months after the biggest wave of street protests in the history of Belarus failed to depose Mr. Lukashenko, who has been the country’s authoritarian leader for more than 26 years.

More than 32,000 protesters were arrested and at least four died during the protests. Hundreds were brutally beaten by the police. NEXTA emerged as the leading online outlet coordinating the demonstrations.

Backed by Mr. Putin and using extraordinary violence, Mr. Lukashenko managed to successfully crack down on protesters, with the country’s security apparatus remaining loyal to him.

Ms. Tikhanovskaya, Mr. Lukashenko’s main opponent during the last presidential election in August, which was widely regarded as rigged, called the episode with the Ryanair flight “an operation by the special services to hijack an aircraft in order to 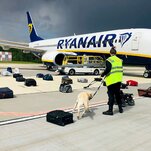