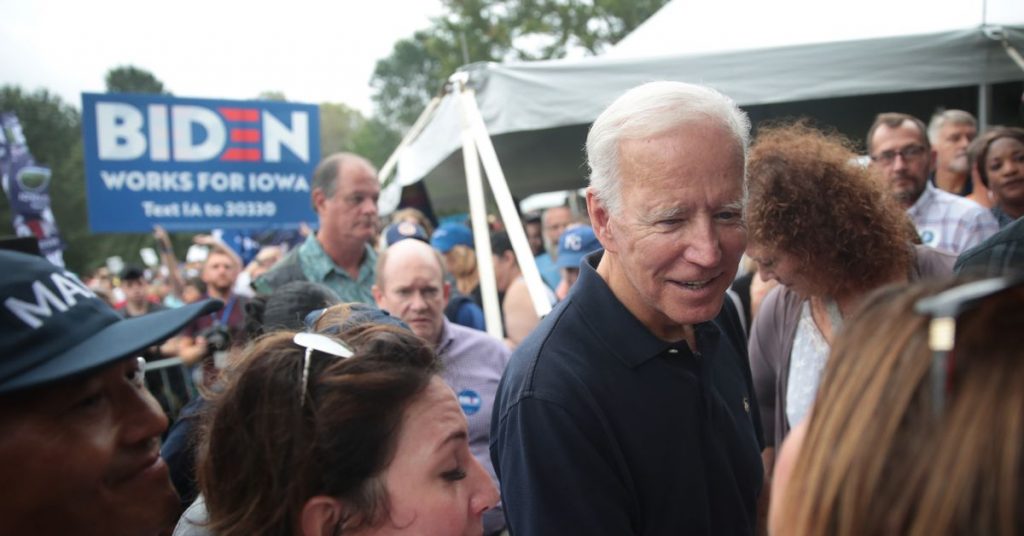 Following a whistleblower complaint that Presidential Donald Trump repeatedly attempted to pressure Ukrainian government officials into investigating the business dealings of Joe Biden’s son — seemingly in effort to damage Biden’s candidacy — the Democratic presidential contender is now calling on the president to share the transcript of the phone call in which the conversation allegedly took place.

The whistleblower filed their complaint in August, and it includes descriptions of a July phone call in which Trump is said to have attempted to pressure Ukrainian President Volodymyr Zelensky to work with his attorney, Rudy Giuliani, to investigate Hunter Biden’s business ties in that country. The Wall Street Journal has reported that Trump brought up the matter eight times in the course of the call.

Trump has claimed he did nothing wrong on the call, but his critics, including Biden, argue that the allegations suggest he attempted to have a foreign country meddle in a US presidential election. The former vice president has released a statement explicitly accusing Trump of corruption, and calling on him to release the transcripts of the call.

“If these reports are true, then there is truly no bottom to President Trump’s willingness to abuse his power and abase his country,” the statement read. “This behavior is particularly abhorrent because it exploits the foreign policy of our country and undermines our national security for political purposes.

“At minimum, Donald Trump should immediately release the transcript of the call in question, so that the American people can judge for themselves,” the statement went on.

Speaking to reporters in Iowa on Saturday, Biden reiterated his calls for the transcripts to be released in the wake of ongoing House of Representatives investigations into whether Trump has misused his foreign policy platform for personal gain.

“Let everybody hear what it is, let the House see it, and see what he did,” he said.

On Saturday, Ukrainian Foreign Minister Vadym Prystaiko sought to distance his country from the allegations, denying that Trump attempted to pressure Zelensky at all. Ukraine is independent, Prystaiko said in an interview, and would not participate in partisan US politics, even if it could.

“I know what the conversation was about and I think there was no pressure,” Prystaiko said, according to Reuters. “This conversation was long, friendly, and it touched on many questions, sometimes requiring serious answers.”

Zelensky himself has not yet commented on the matter as of this writing.

Trump, however, has defended himself at every opportunity. In a press conference on Friday, he said all his conversations with foreign leaders have been appropriate, and called the allegations a “political hack job” and “another media disaster.”

And on Twitter on Saturday, he called reports about the call another element of the “witch hunt” that he has accused the media of being on since his election, adding that the believes the allegations were concocted to “protect Sleepy Joe Biden:”

Now that the Democrats and the Fake News Media have gone “bust” on every other of their Witch Hunt schemes, they are trying to start one just as ridiculous as the others, call it the Ukraine Witch Hunt, while at the same time trying to protect Sleepy Joe Biden. Will fail again!

For his part, Biden has also seized on the controversy to appeal to his base, in a fundraising email to voters and potential donors in which his campaign suggested that Trump’s response to the allegations demonstrates that he fears a Biden candidacy:

The former vice president stopped short of calling for Trump’s impeachment, as some of his primary rivals — like Sen. Elizabeth Warren and former HUD Secretary Julián Castro —have.

Instead, he has called for an investigation into the allegations, something that is already underway. The House Committees on Foreign Affairs, Intelligence, and Oversight and Reform have been ramping up their joint investigation into whether Trump has solicited reelection support from the Ukrainian government.

They have been hampered thus far by a lack of cooperation from Trump administration officials, including the office of the Director of National Intelligence, which has refused to give Congresspeople full details about the complaint, despite being required to do so by law.

Given that the Trump administration has been uncooperative during investigations involving special counsel Robert Mueller’s report, there is little to suggest it will begin working with Congresspeople to further the whistleblower investigation. And since Trump has said he doesn’t think he’s done anything wrong, there is even less chance of him releasing a transcript of the call in question.

Instead, the Trump administration will likely continue making the case that Biden was involved in illegal activity in Ukraine with respect to his son, despite there being absolutely no evidence to suggest this is the case. The president did exactly this Saturday, tweeting, “Nothing was said that was in any way wrong, but Biden’s demand, on the other hand, was a complete and total disaster.”