The Himalayan nation has given more than 60 percent of its people a shot. Some villages were reached by helicopter, and health workers hiked through ice and snow. …

THIMPHU, Bhutan — The Lunana area of Bhutan is remote even by the standards of an isolated Himalayan kingdom: It covers an area about twice the size of New York City, borders far western China, includes glacial lakes and some of the world’s highest peaks, and is inaccessible by car.

Still, most people living there have already received a coronavirus vaccine.

Vials of the Oxford-AstraZeneca vaccine arrived last month by helicopter and were distributed by health workers, who walked from village to village through snow and ice. Vaccinations proceeded in the area’s 13 settlements even after yaks damaged some of the field tents that volunteers had set up for patients.

“I got vaccinated first to prove to my fellow villagers that the vaccine does not cause death and is safe to take,” Pema, a village leader in Lunana who is in his 50s and goes by one name, said by telephone. “After that, everyone here took the jab.”

emphasized its citizens’ well-being over national prosperity, had administered a first vaccine dose to more than 478,000 people, over 60 percent of its population. The Health Ministry said this month that more than 93 percent of eligible adults had received their first shots.

The vast majority of Bhutan’s first doses were administered at about 1,200 vaccination centers over a weeklong period in late March and early April. As of Saturday, the country’s vaccination rate of 63 doses per 100 people was the sixth highest 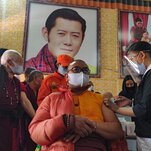